Ok... so with Duke and Massive Voodoo and Germany behind me... I set out to put brush to model and create something great! Or at least be able to put to practice some of the techniques and styles that I picked up over time. And what better way than on something completely foreign to me and that which I am not used to painting. To force my mind into painting a different style!

So in walks this Historical piece from Andrea. A 1650s Samurai Ronin from Japan. Nothing fantasy or sci-fi about him. And if I painted him with blue or green skins I think I might get hanged by the historical painters guild and have my paint brushes revoked!

With this in mind, I tackled the piece from Andrea with a goal in mind! Power paint ( brought to you by a good friend of mine from Berlin.. you know who you are ;) ) through the piece and see how well I can make it look by the end of the process.

Starting on Friday afternoon, and finishing up on Monday's Bank holiday here in UK, I think I have a more successful result than when I tried to speed paint something in the past.

Let's start at the beginning of the model though instead of the montage I have rocking the top of this page. Excuse the photos as many are from my cell as I was sending photos to my Facebook wall and friends fast and furiously throughout the project. 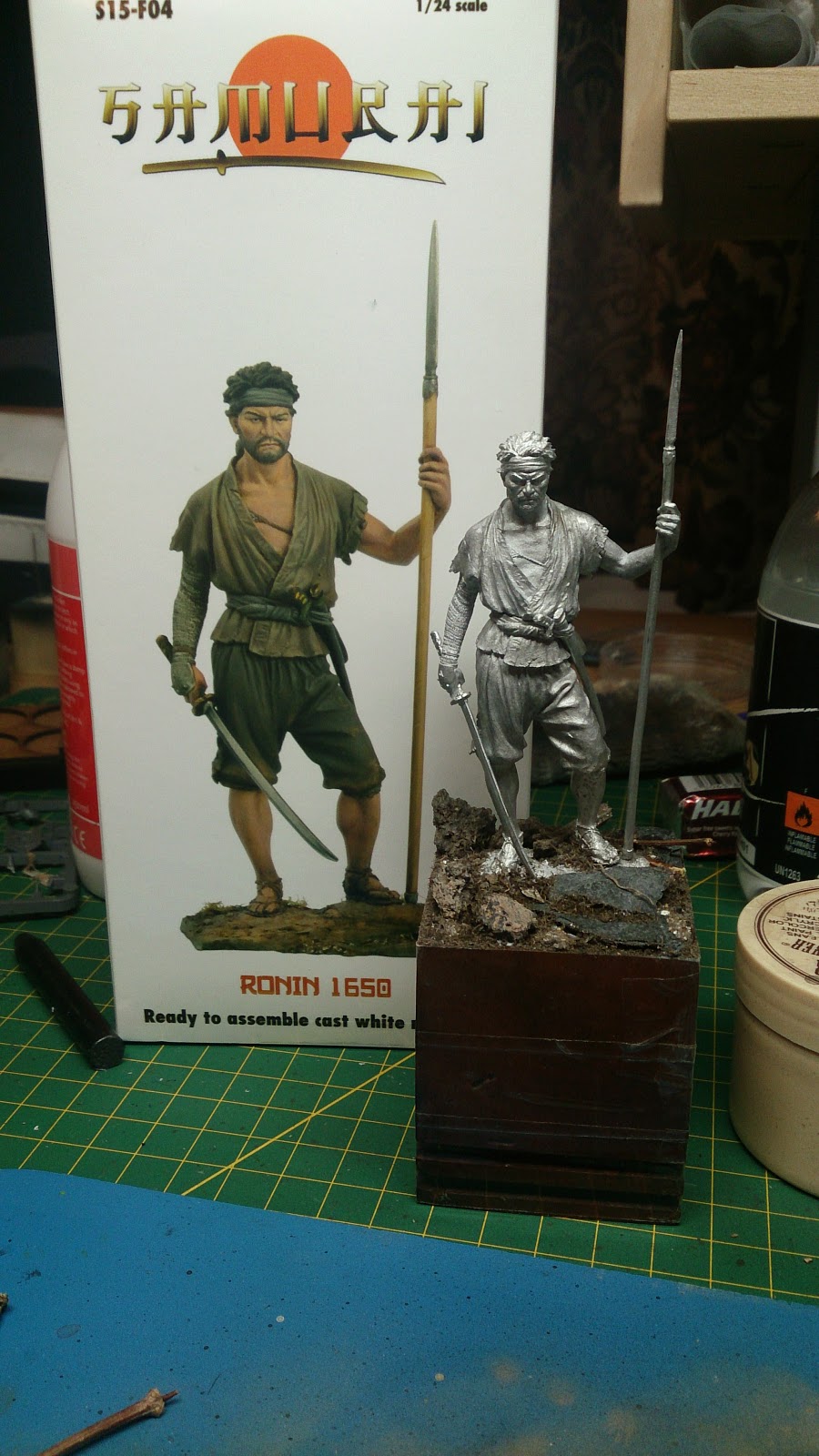 The model was a clean cast overall, and had very few issues with getting it put together. With all my metal miniatures I gave it a liquid green stuff wash to make the paint hold on it better. The base was kept really simple. I took the main metal stand it comes with, and then glued some slate and lava mountain rocks from Cyprus on it, before covering the rest in dirt. I then coated the entire thing in watered down white glue to hold it in place and make the painting stages on it far easier. 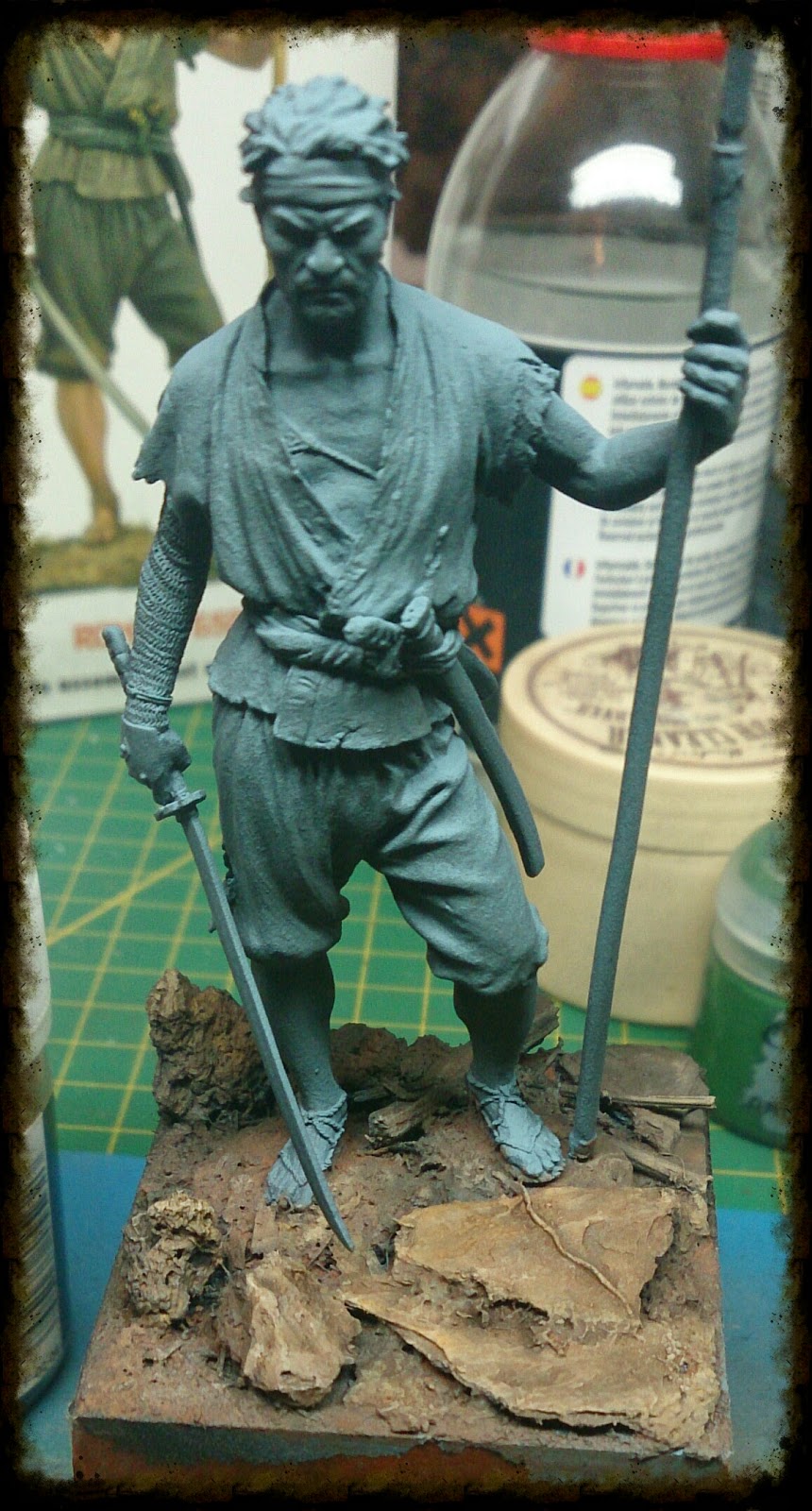 I primed it black, but also then did an overspray of light grey/blue hue. My original plan for the model was that it was a fighter standing on a hill looking out at night. But I should know by now that all plans are doomed to fail for me, and that the brush will tell a better story as it is required.

I had started the basing as you can see here, but then I received a knock on the door from a delivery person. What had I received? A massive amount of goodies from Modelmates, including some mud and sand mixtures! Huzzah! So what better time to play around with them then on a piece I am trying to paint better on! 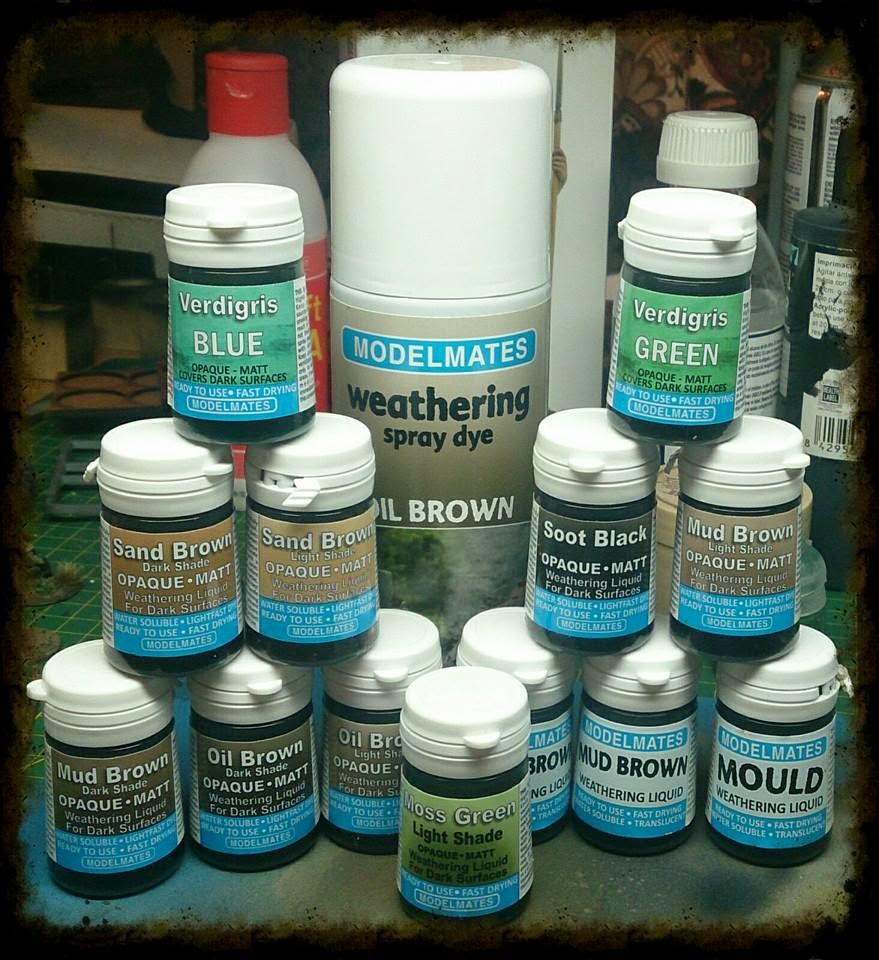 Expect a bigger review of these in the future also, but in the meantime I got to play around with the Muds and Sands on this piece. Also some of the moss green mixture. 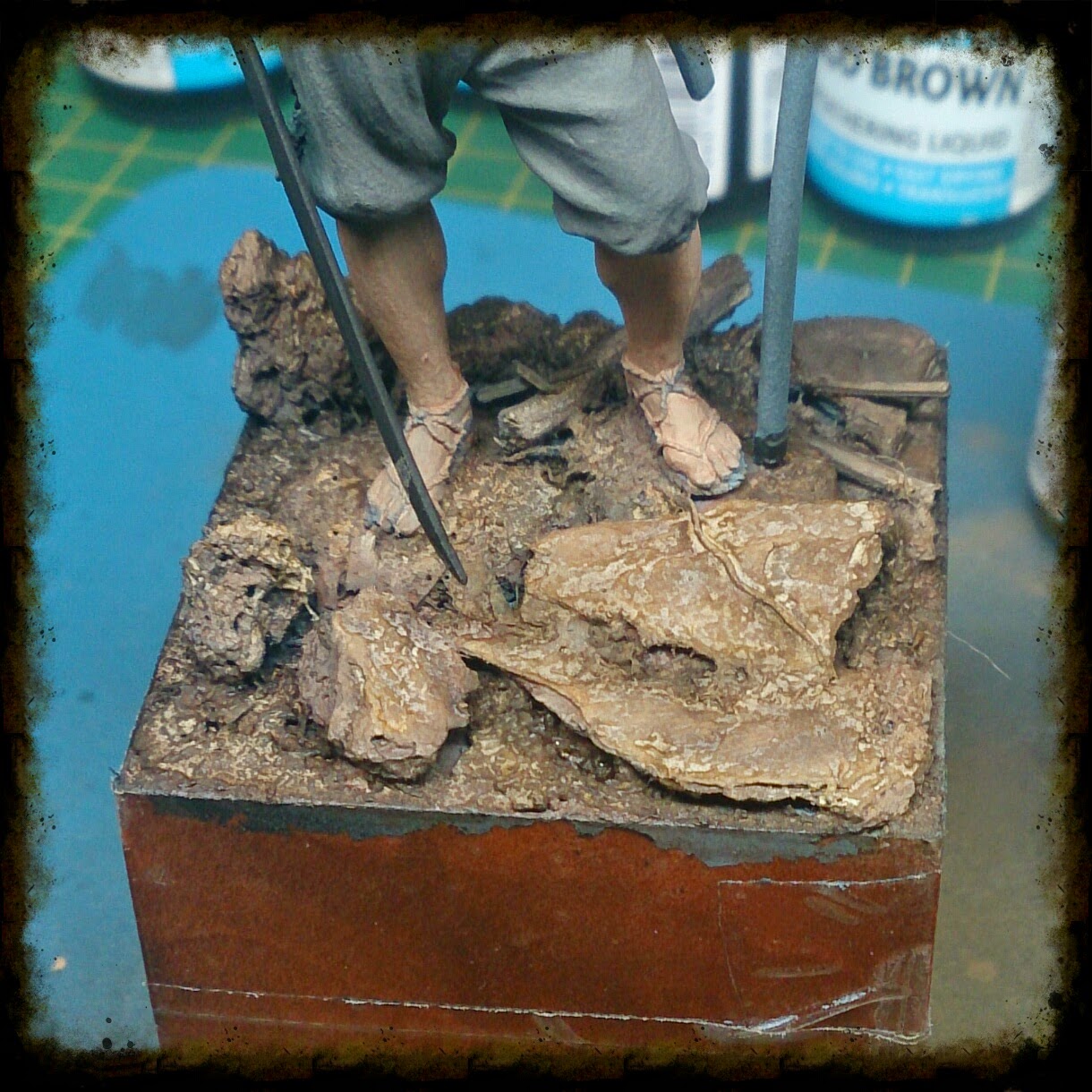 The end result is that it gave the already textured materials laid out on the base even more texture! A few washes with some browns and greens and the colors really began to come forth! Lovely stuff, but more tests required in the future for exact results... but overall lovely stuff once more! Some touch ups are required for it, but nothing major. 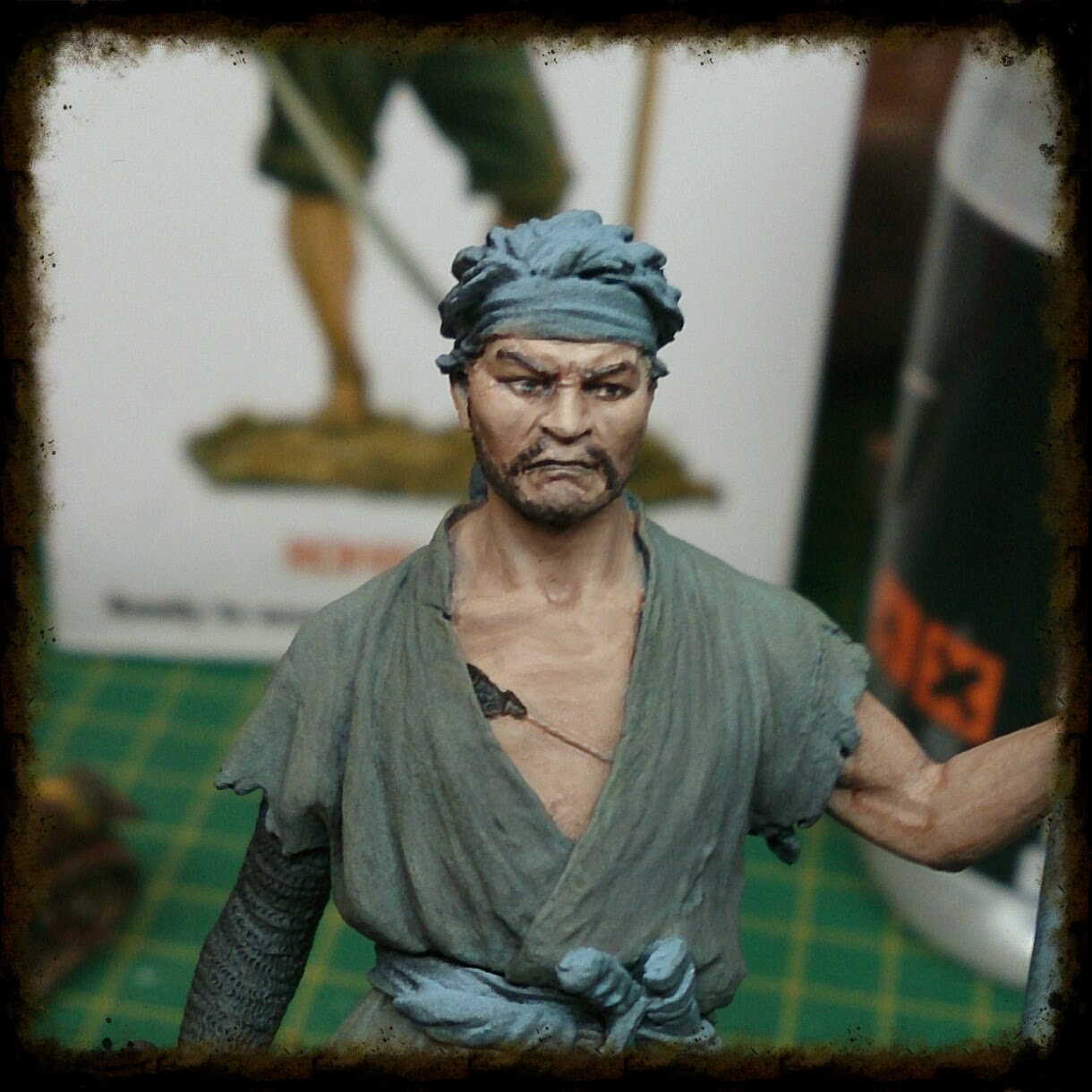 Something that has been told to me many times, but never sank in was to work on the face and eyes especially in order to build up the character of the model more. To see the direction that it is heading well in advance and let it guide you. On this piece I tried just that. Working first on the face, getting a rough sketch going, and then diving into the eyes. See what sad sorry this lone Ronin has to tell.

I can say from there the painting really took off quickly. Basecoating the other sections to get a feel for it, and seeing where this model would take me. Sweeping my brush up and making the paint fly! 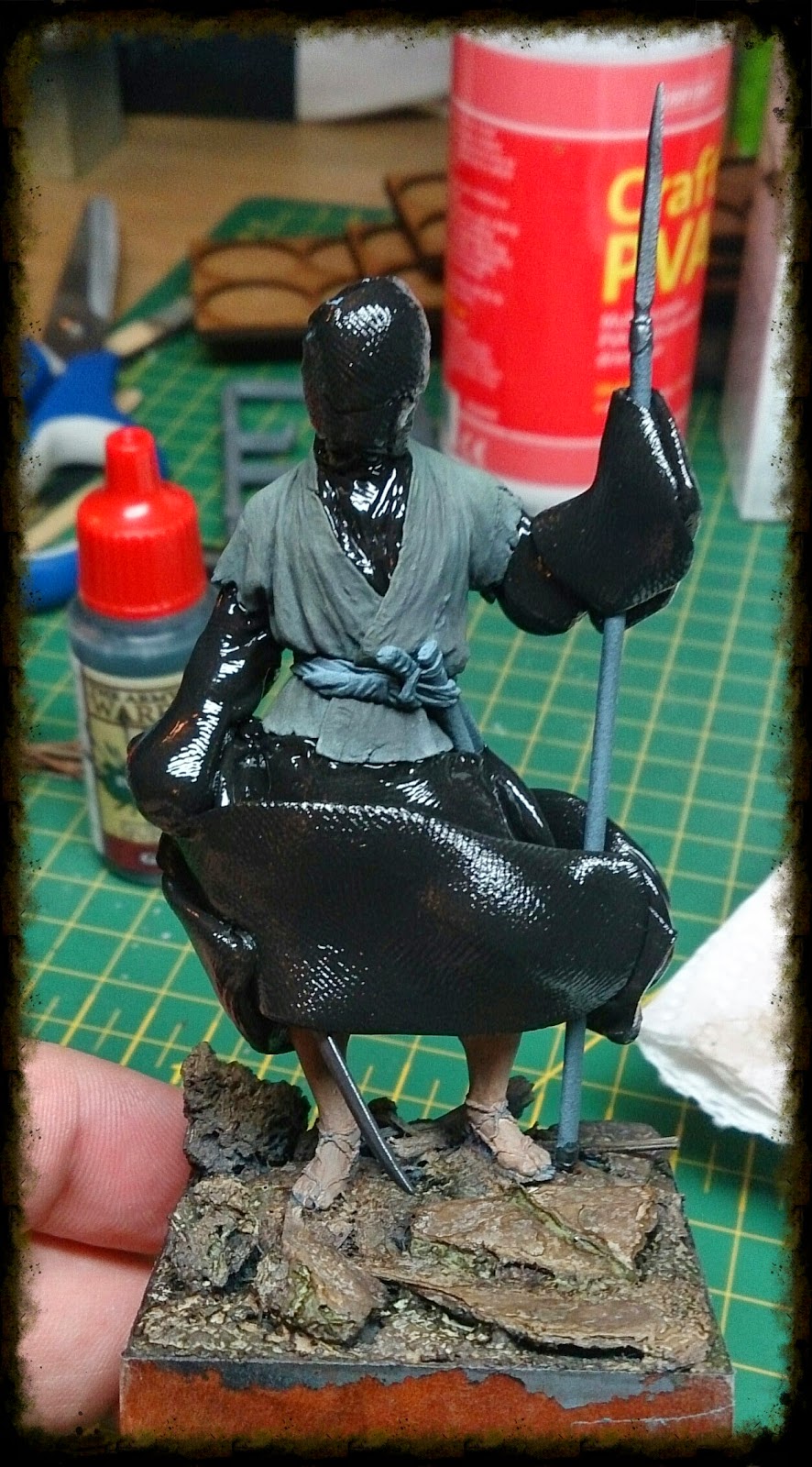 I again played around with the PK-Pro masking putty to cover up most of the model and allow me to play with the airbrush on the jacket a bit. Creating some shadows and what not on it faster than I could with a brush. Normally I would loath this part, and just struggle with the brush cause many masking putty/liquids are horrendous to work with. But this went on quick, held firm. Worked well with my metal sculpting tools to get into the nooks and crannies. And when finished it came off quickly enough.

Only issue I faced with it though was when I tried to push it around with my plastic smoother tools for sculpting. It sticks to that quickly, and really didn't like coming off of it. So lesson learned there! 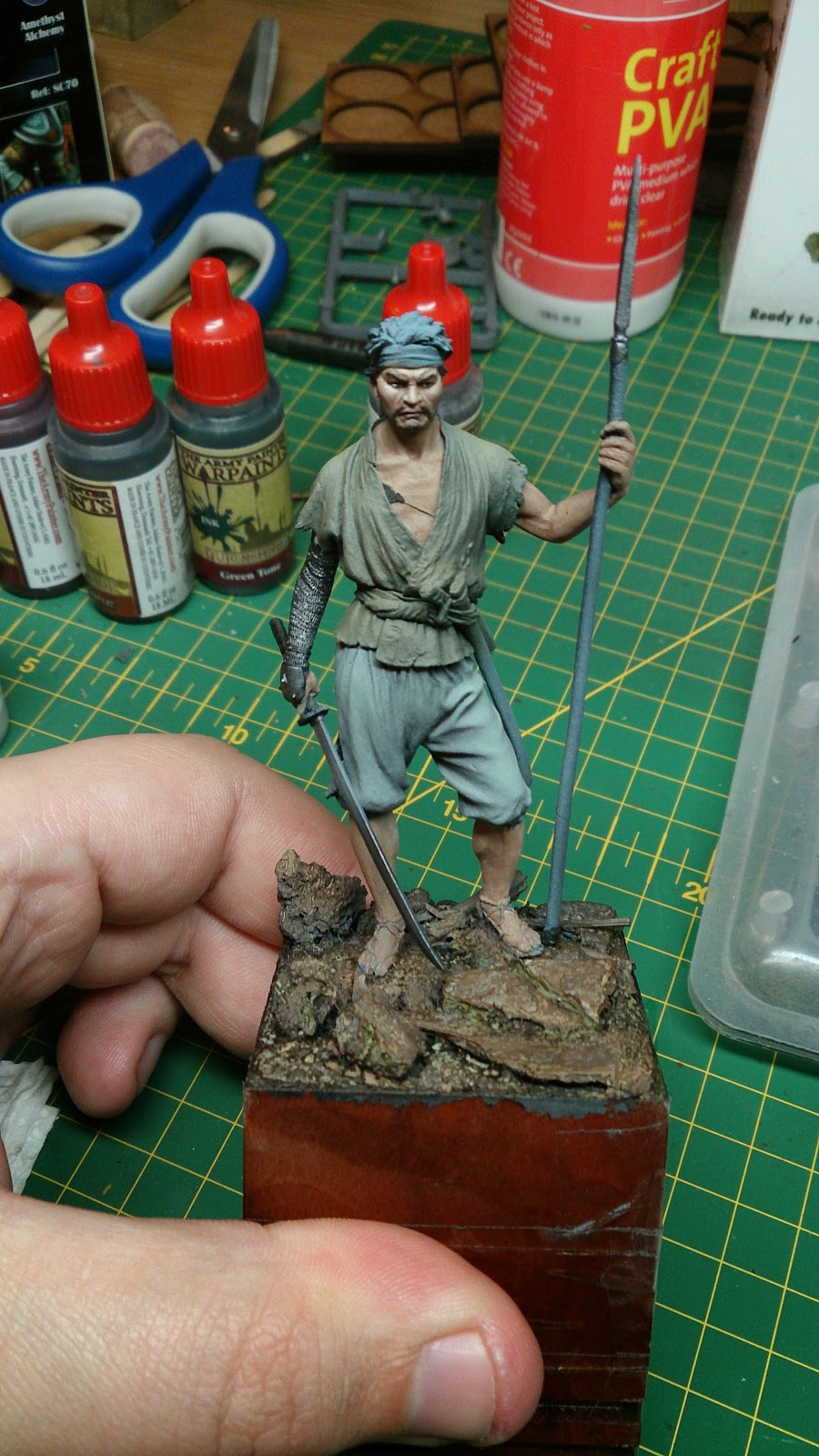 Above you can see the results of the airbrush work after the putty came off. Quite a difference I think, and moved me along to the next steps quickly enough.

From here it was a flurry of activity and one that I didn't take a lot of photos of. Not because I didn't want to, but more because I was just working so quickly on everything and moving between the steps so fast that the urge to stop was not within me. Like a man possessed the brush moved as if it had a will of its own! And before long, the Ronin had gotten to a state of completion that I would normally get it to! 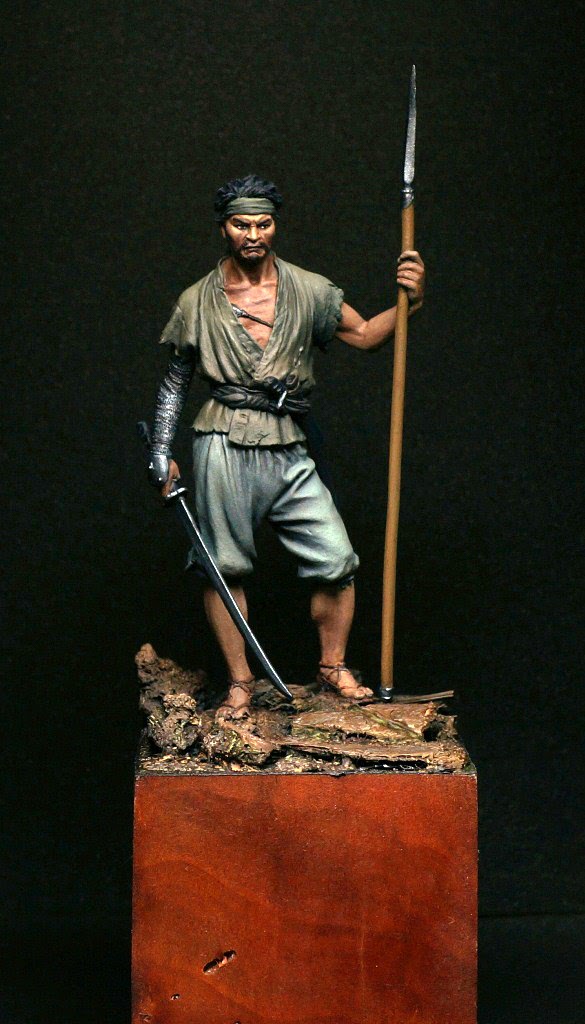 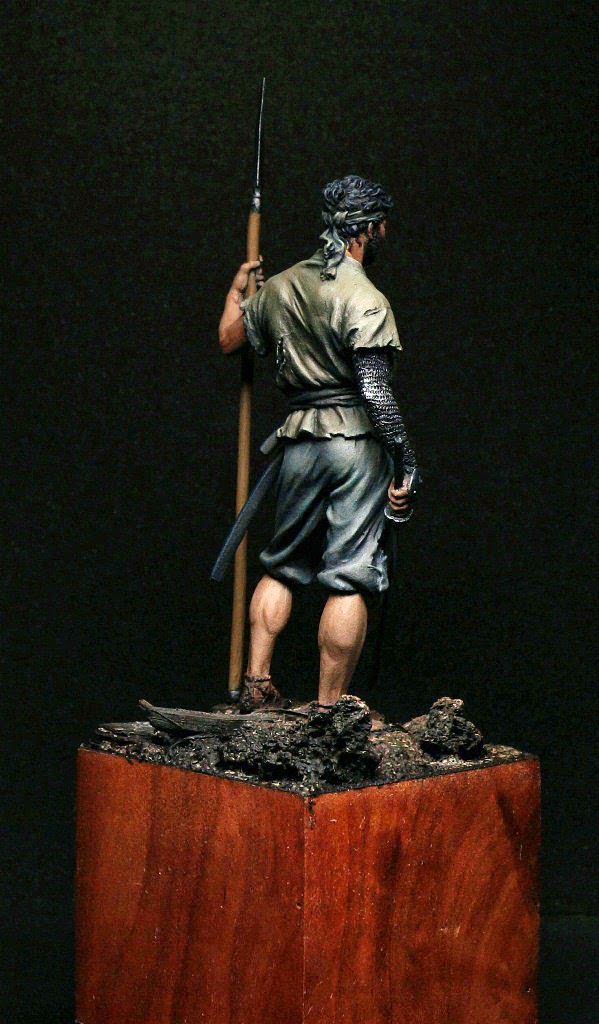 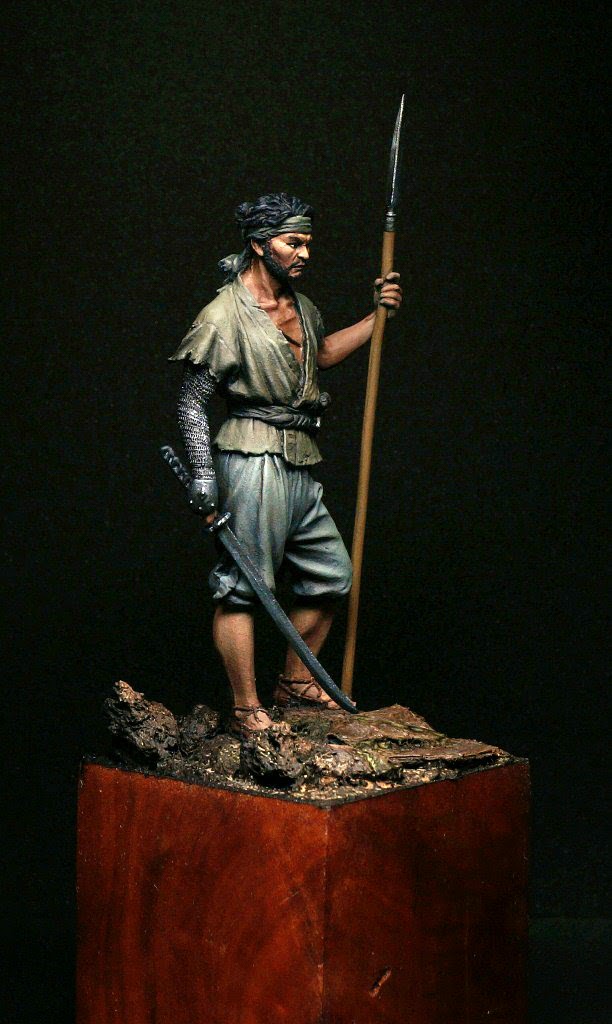 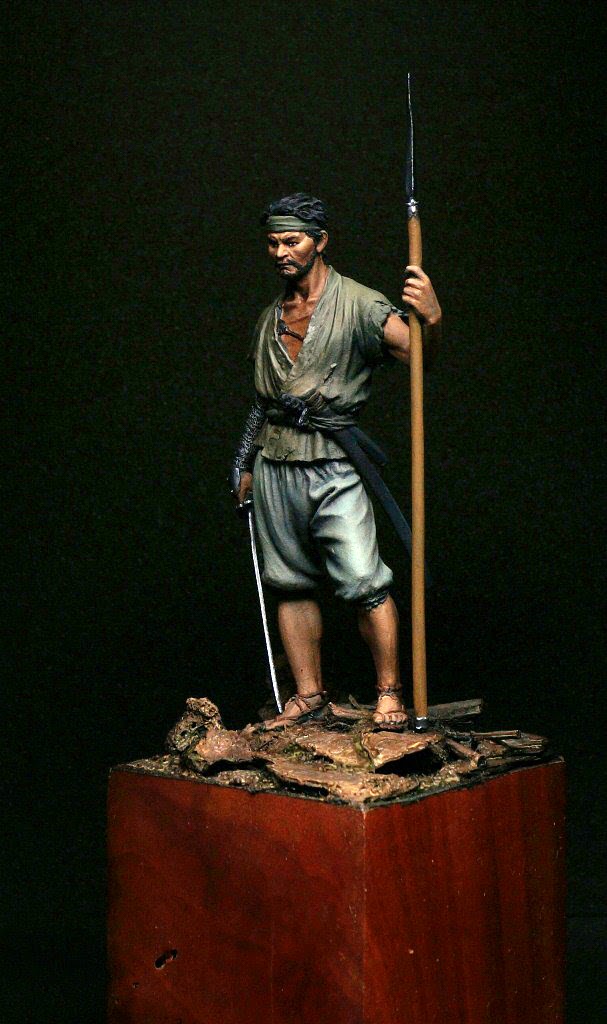 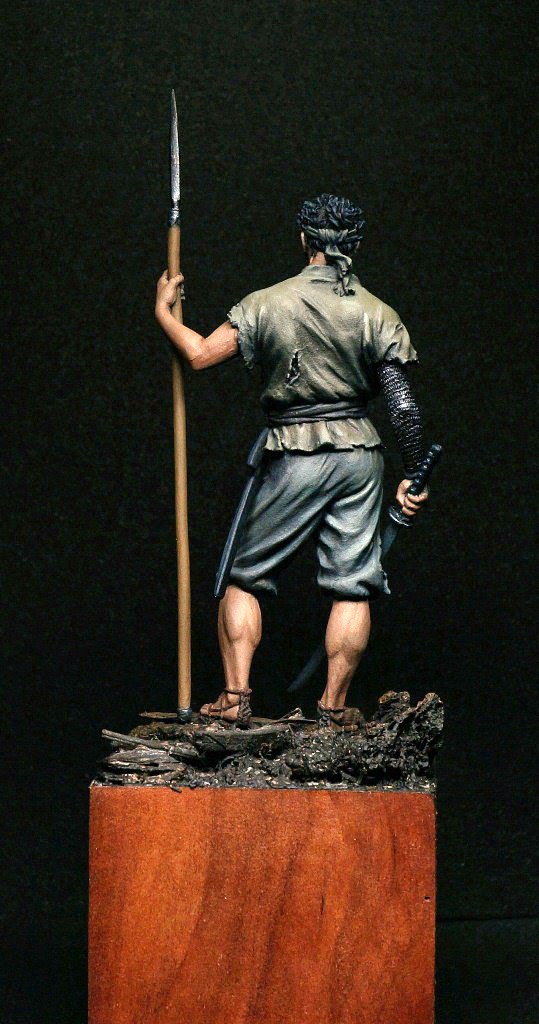 Whatcha all think? Nice eh? Though I can say that it really is not actually finished. This is just putting it to the level that I am normally capable of, and comfortable with. Now I need to look, push, get feedback on, and improve upon that painting even further. Or else why have I continued to go and do painting classes otherwise?

So if you have comments or thoughts on how to improve this model, then please speak up! :) Otherwise.. leave nice comments below... curious what you all think about the miniature!
Email Post
Labels: Good Historical Japan