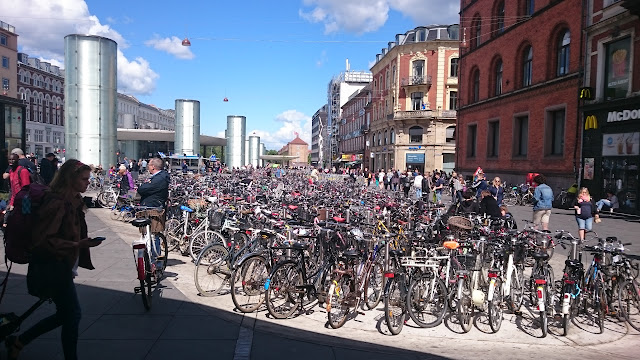 Denmark.. land of a million Bikes.. and the above photo only shows off half of the area of bikes that we were standing in the middle of!

So why in Denmark? Well Roman of Massive Voodoo was doing a Beginners class in Denmark.. and my good buddy Burak from Izmir was wanting to go to one such class. But he was a bit nervous of going by himself so I decided to go with him and get a nice refresher from Roman while hanging out with a ton of friends in Denmark. 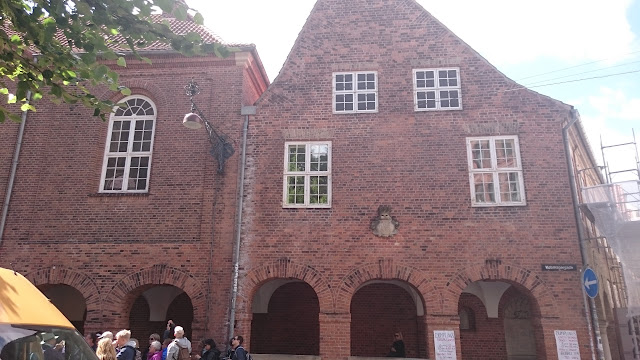 Our trip started on the Thursday evening where Tue and Bo met us at the airport and helped us with the transportation aspect of the trip. From here we met up with some other Danes and a Strange German traveller with a monster bag full of goodies. After some tasty, and odd, Burgers and beers, we were meeting up with our hosts for the weekend. Jacob and his friend Charlotte whom we travellers would be staying with for the weekend.

Friday morning, Burak and I had some free time to explore the city a bit. Having some Danish Danishes and Cinnimon Rolls, we headed to find the venue location. Which seemed to be literally down the streeet ( though 20 minutes by bus ) from where we stayed. Making it very central and easy to get to! 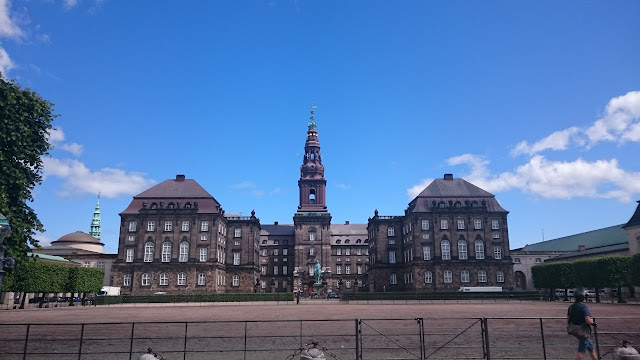 We had a chance to check out some of the local scenes and pop up food/music venues scattered around the center also. And get in some of the nice sun that was available that morning! 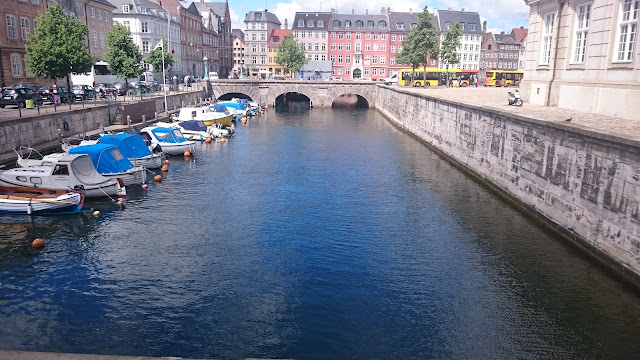 As we sat for food, Tue and Kristian met up with us for some beers, and some more exploring before we moved back to the apartment to pick up our gear and head to the venue. 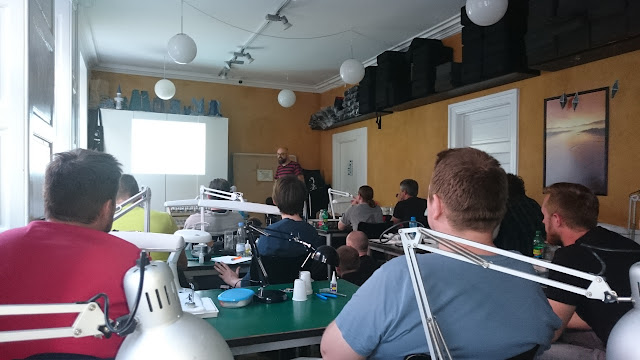 Once in our seats for the class things kicked off as it should.. with some serious chats about colors and theory. Also explaination of what we would expect over the course of the weekend. For me this was a treat as I was the only one to be repeating the class, so although it has been 3 yrs since I have taken the course, much of it stayed the same. Hammering in the concepts and topics ( like basing, painting, etc )further and refreshing those that had escaped over the years.

While discussing about this it was also noticed that this would be my 6th class ( 2x Beginners, 2x Bam, Basing and Private Coaching) with Roman. I know in the past I might have had a bit of a stalker vibe going with regards to being around Roman, but honestly it all comes down to timing and coincidence.. really! 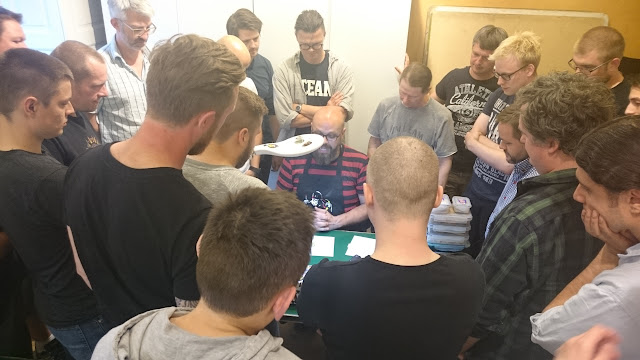 As always in the class Roman would go through many of the techniques and demos with all of us crowded around him. I would stick to much of these in the beginning, but have to admit I would skip some on day 3 there though. Mostly due to wanting to push my model as far as possible while he repeated things that were coming back in floods to me from previous classes with him! 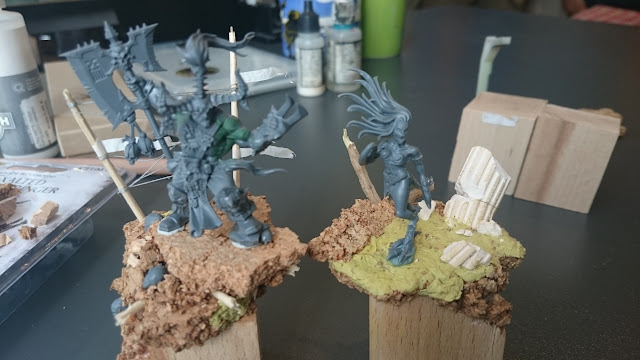 The models for the class.. as it is a Beginner class you are to paint up a demonette like Burak's on the right there. For those returning, I got to choose a different model and I had picked the Khorne Champion there. 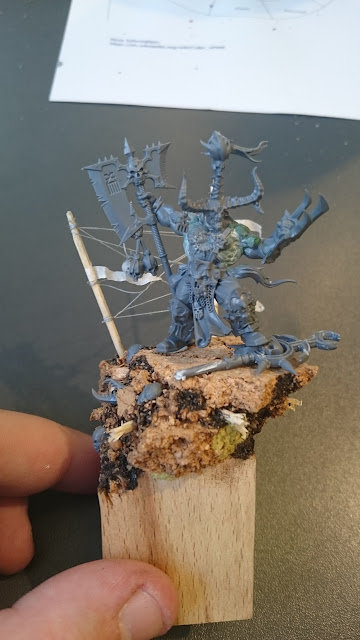 Quite the beast of a model, and I was concerned I might have chosen wrong due to size and complexity of it. But in the end I believe it was a great piece for me to learn a few more things of what I wanted to work on, and push myself on a few areas. 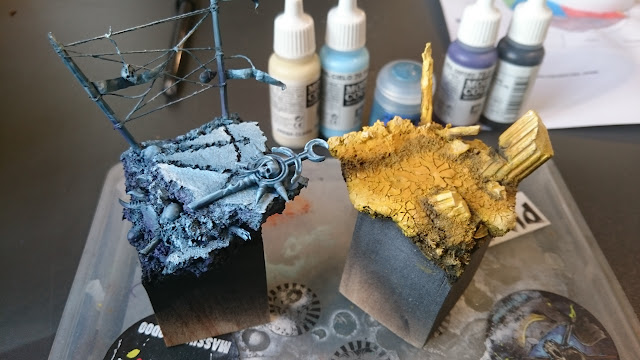 It was when we got the bases primed and colored that Burak and I realized that we were channelling our inner Fenerbache fandom here.. With such a vibrant yellow with my bit paler blues on the bases.. Burak was, and I think I am summarizing here, overjoyed to see such colors and thoughts coming out for his favorite teams colors... :D 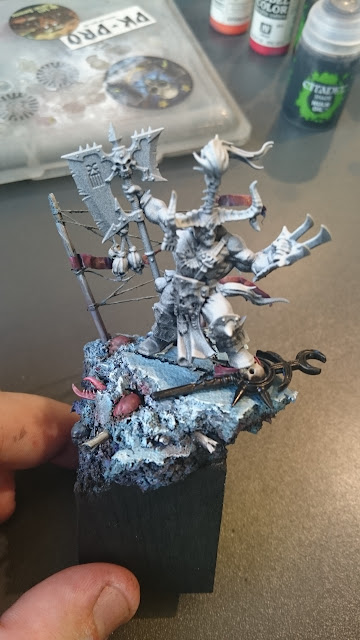 The model was beginning to look cool on his base, and keeping that atmosphere going with it was going to be the trick for me. 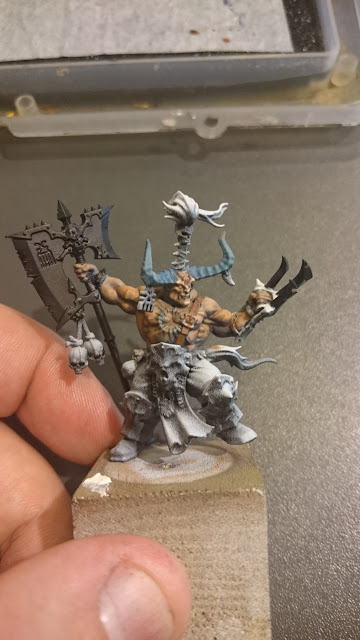 I had started with a heavy blue base for the skin ( as can be seen in the horns ) and then began to work them back up. First in warm tones, before Roman came by to say that we should make him have his cold feeling once more! 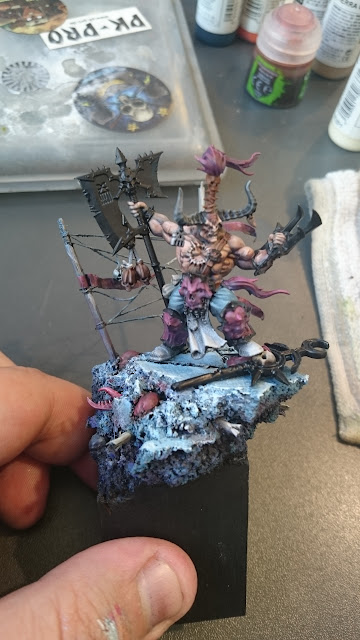 Quite a push for me to get it to this point, but overall I think it was looking good. 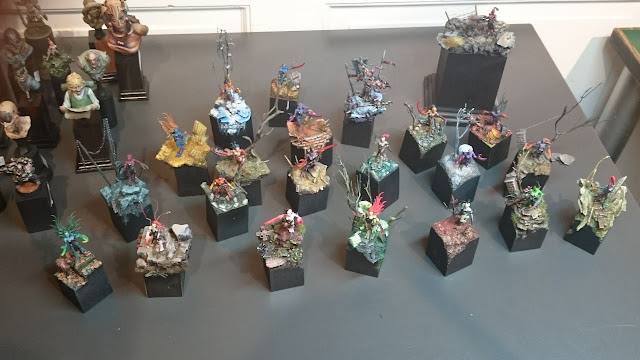 This was pretty much all I was able to get to before we moved to the group photo shots, and calling it a day. As you can see from the entries of work that everyone accomplished, they were all quite varied and different. Which is amazing when you think we all had the same pile of sockets and basing materials to start from, and given the same instructions on what or how to build up a base. 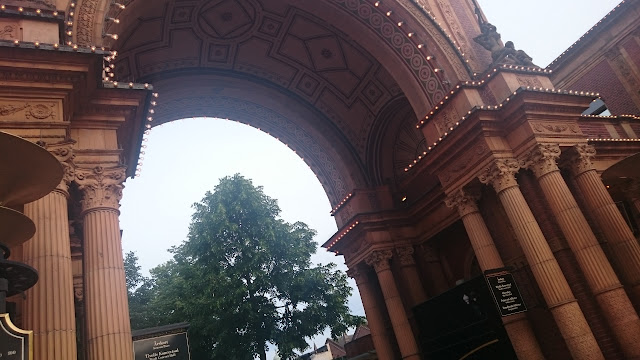 Once all was completed we were treated to a trip to Tivoli in Copenhagen to see Europe's oldest Amusement park.. I want to say thanks to Tobias and Jacob for taking us here, as it was quite the place to head to. 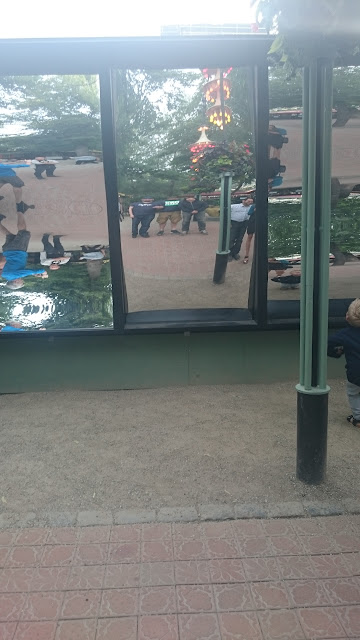 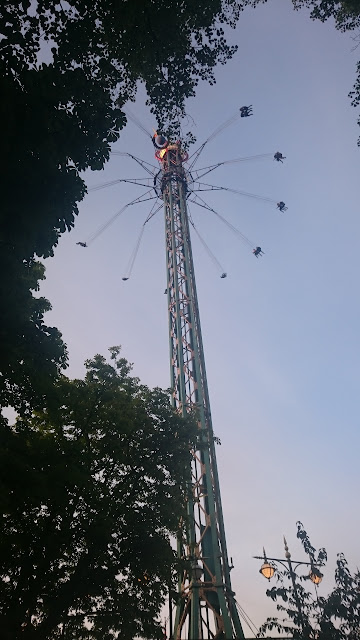 .. and insane rides! Like these we had to take videos of below.. 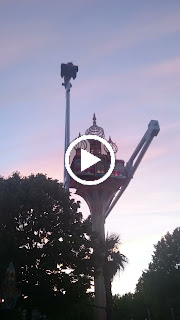 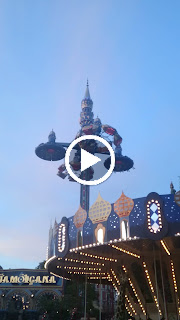 All before we headed home to finish the night and the trip... 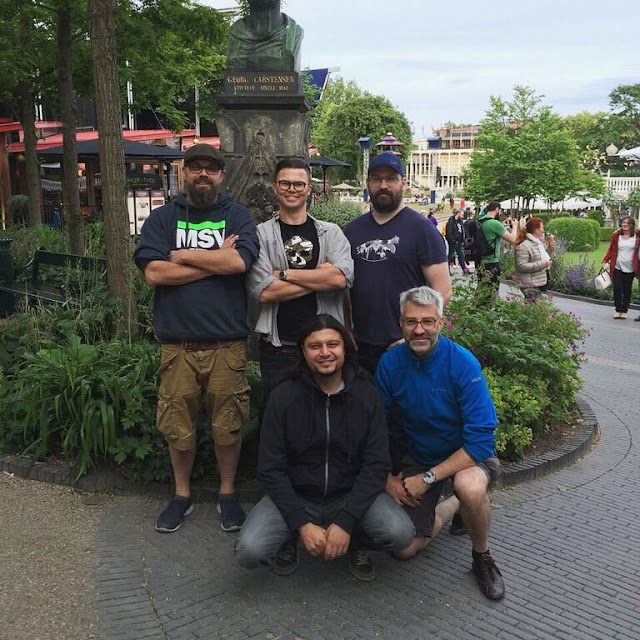 In the end, it was a great time in Denmark. The people there in the class and hosting us were great. And I can say that taking the class with a good friend made a huge difference in the class. Having Burak along with made the trip less lonely than normally going on these trips, and a hell of a lot more laughs were had. More so when you can watch dumb videos in person together, and have them carry along with you for the remainder of the trip.. Escalator? :)


Now to harness the painting mojo from the class and see where it takes me.. see if I can finish this Khorne dude, or if I will move onto a different project where I can take what I learned and move forward on my own with it.

Thanks again to all that were there, and looking forward to the next time we all meet up! Monte perhaps? :D
Email Post
Labels: Massive Voodoo Painting Class Review