3 yrs between classes.. what's the difference? 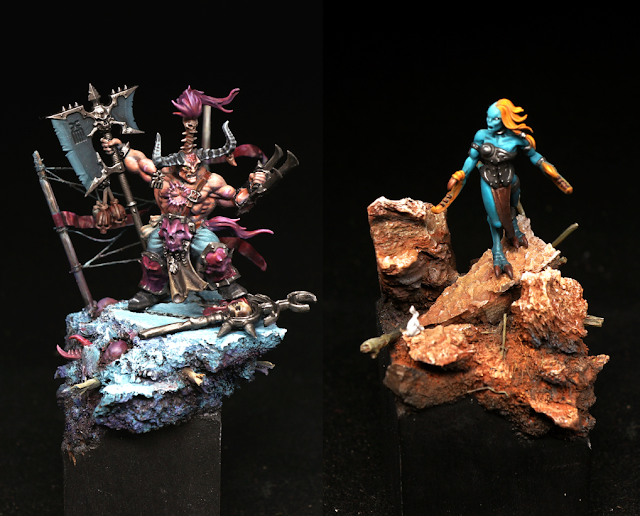 I thought this might be a cool little comparison between when I first joined Roman's Beginner class 3 years ago, and the class I took this past weekend.

On the right we can see the original deamonette from the class with Roman way back in 2013 in his home town of Augsburg. This was back when I was just beginning to paint more than table top miniatures and was what I consider my first real class on how to paint ( I had taken one with Dervish in Aacken, but it was far too advanced for me to fully grasp the techniques until a year later ). 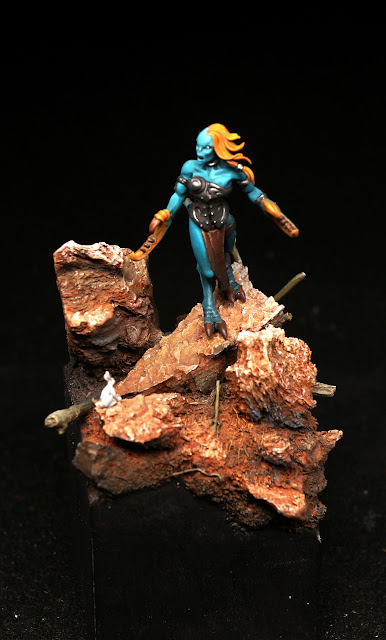 So the demaonette from 3 years ago is pretty basic overall. I still think this is a cooler base than others I have made since. Only cause of the way that the paint and colors came out on it. Having the bright orange brown tones highlighted up to white on it were quite a lot of fun to do.

And it contrasted nicely with the Blues in the deamonette. Though to be fair, the painting on the deamonette were a bit rubbish overall. I look at it now, and know that I could or should be pushing the contrast on the skintones further.

The transitions to the claws were a bit rough, and the overall brush strokes throughout the model can be seen a bit too much in areas that it shouldn't be.

That being said though, I still like looking at this piece as it was my first real showcase piece overall.

It would also be one of the first models I would try to do decent eyes on a model of this size. And although she came out looking like she was shocked, I used that to my advantage on the piece by adding a small Rabbit to the piece. As the eyes and the position of the Rabbit were almost in sync.

In the end, the original piece was meant to give me an idea on how to do color contrast more than anything, and I think I achieved that with the blue/orange combo happening there. 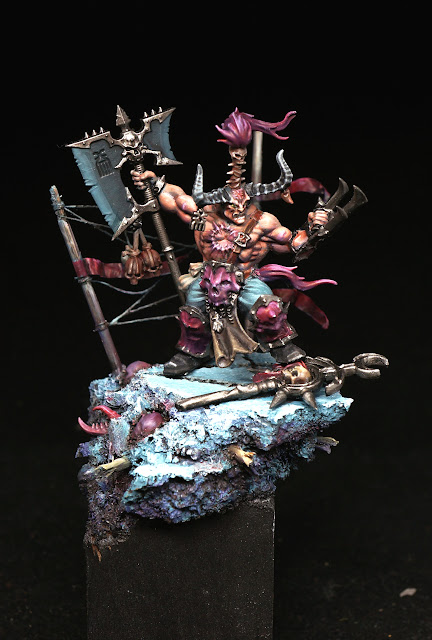 With the class just passed we upped the game a bit. Roman had mentioned how I was able to bring my own model to the class ( instead of doing the DEMOnette ) and after much deliberation I came up with this Exaulted Deathbringer. I had others in mind, but I figured it might be better to do a GW model as that would sit more in line to the class structure better. Plus I suspected that I would be able to take much more from the class through this method as well.

What we worked on with this piece though also was more about atmosphere as well, instead of just contrast. We would do contrast still within the piece, but more of a warm/cold variety at a basic level, while still attempting to keep a cold feeling.

One of the biggest struggles for me on this was keeping the skin colder. I had originally thought that if I started with a cold base that this could continue through to the skin itself. So starting with a faded blue base, and working the skin tones up it would keep.. though I made mistakes along the way with too much red/orange in the skintones that warmed it up and made the piece start to fall out of sorts from the scene.

Roman then came back to remind me that we were working within a specific color range. So to make the feeling colder, and to tie it into the base, we need to be using some of the same colors here.

Taking a pure white, and the ice blue, we mixed up a colder white tone. This was then mixed with the skin colors to give us a highlight. The goal here was to make the model feel colder, while also highlighting it up to bring out the contrast some more.

I believe in areas it worked nicely, in others I think I need more work. But the feeling of it working within the scene was there now. Hopefully I can follow along with this throughout the rest of the model sections that are not finished yet ( like the axe and armor parts ).

Though I am still not fully sold on the base, and I hope once I begin to add snow to it, that it pulls more together as well. Otherwise this guy is going to be ripped from the socket base, and put to a gaming base. And moved into the White Tower ( once I purchase it of course ).

Hope this was interesting for you though, and am curious what you all think of the model, the painting, and the scene as a whole at the moment?
Email Post
Labels: Chaos Good Painting Class