Handsome Jack gets some painting! 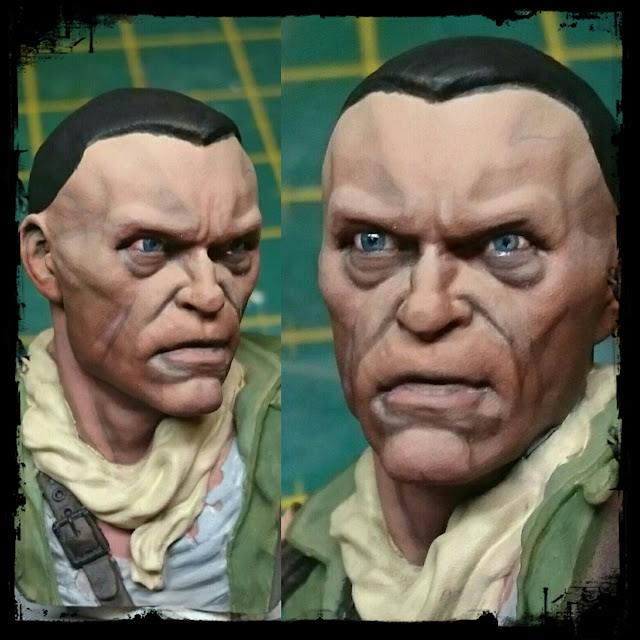 So with the busts firmly in hand at the moment I have had a chance to dive into painting one up.

Really trying to let the model speak to me more than push a color scheme, and it is sorta working at the moment.

At one point it was looking a little undeadish.. so expect to see such a copy in the future perhaps :)

First off.. we needed to get it cleaned up and primed. Most will only need to remove the venting from the back and bottom section of the bust. Which is easy enough with some clippers and a craft knife. 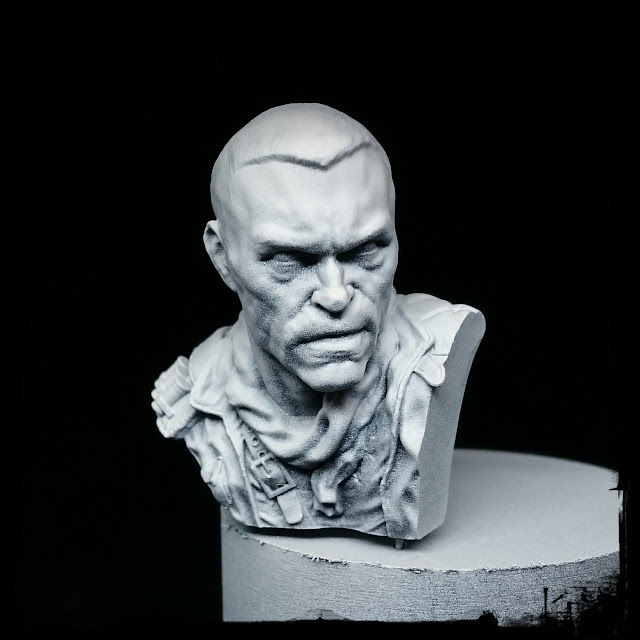 Went with the 2K priming. Usually I would have used the airbrush for this to get a smooth gradient, but since my trip to Germany I have moved back to spray cans for a bit. Just to see how it works for me, and if the paint holds better to the model. There is a bit more grip to the surface, but also a bit more grainy as well. 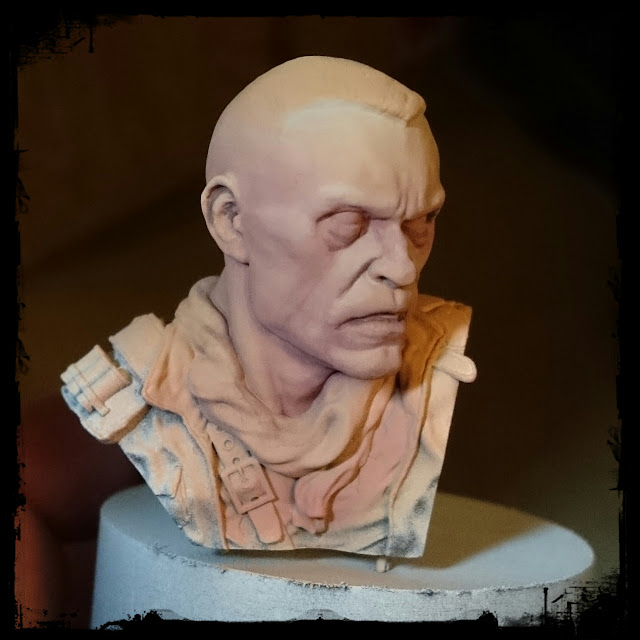 Airbrush was then pulled out to begin to give it the starting tones. Mostly ScaleColor flesh tones here. Basic Flesh, and Indian Purple for the shadows. 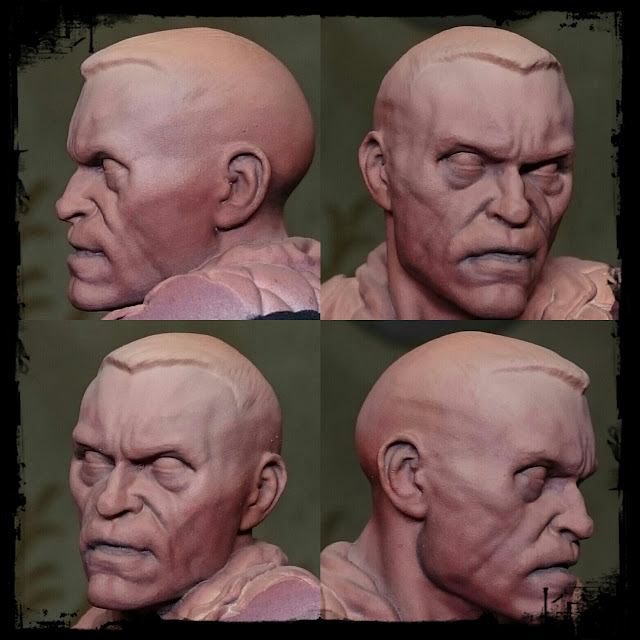 I think I may have overdone it with the reds added to the mix here at this point though. And the paleness of his skin was beginning to show.

Thinking back to painting classes I have attended, I knew that I needed a bit more life back into it, but also saturation. So started to play with yellows into the mix a bit, but also some blues into the shadows to counter the saturation. 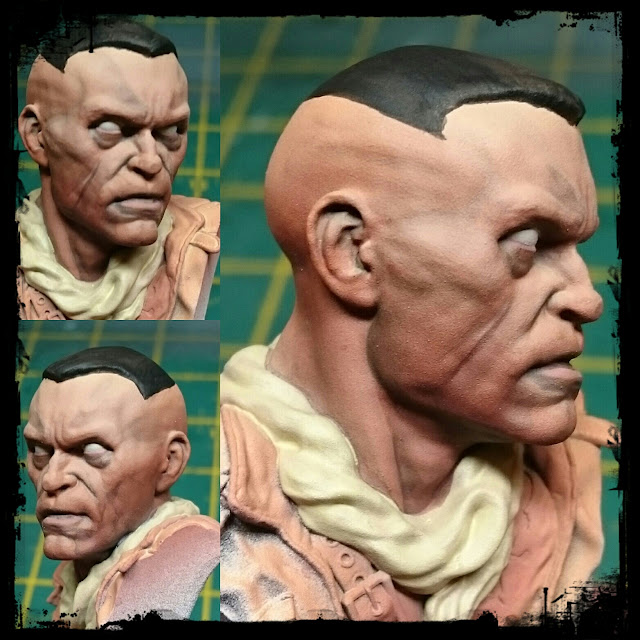 It began to take better shape here. Still needs some work, and the hair "piece" was temporary. My wife ( and her best friend ) keep commenting that I should not keep it black for the hair. Having the same conversation with them over and over again about how it is a placeholder to check the skintone and how it works.

A bit of brown was glazed over and over again on the lower cheek parts to give it some depth, while I continued to push the highlights on the central and upper face.

At this point I was getting more happy with the look and feel of it, and needed to work on the eyes.. which will bring it to life and give me some more direction as to the painting style as well. 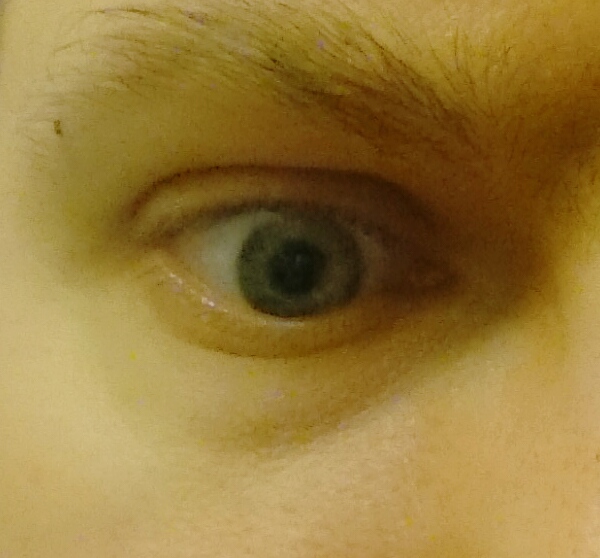 Hate doing this, but needed to get a reference for the eyes.. so took some extreme selfies here to get a better idea on where to go.

I wanted a colder, off blue like color. So went with a very de-saturated blue from GW as a base, and would add white and black to it accordingly. Well deck tan actually, but only cause I thought it was white at the time :) 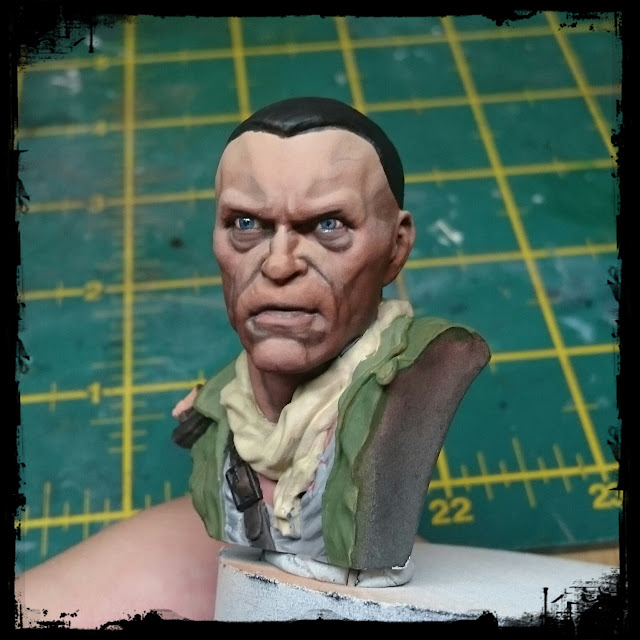 It worked well enough I think.. I could do them a bit better, but I get the feeling I was looking for from it. I put a layer of gloss varnish over the finished eyes, before adding a touch of red to the corners and reglossing it. Give it a bit of depth.

Blocked in the rest of the colors for the bust to get a sense of direction and am liking where it is taking me now.

Now at the point where I need to figure out the textures for the jacket and scarf here. Looking forward to working on it though, and been letting it sit and breath a bit while I work on other pieces.

Still have some for sale however, though they have been going quickly over the last week! Which I am eternally grateful for to all that have supported us so far! Really appreciate the comments and feedback so far, and looking forward to seeing more!

Let me know what you think of it, and if you want one email me at mrleesminis@gmail.com!