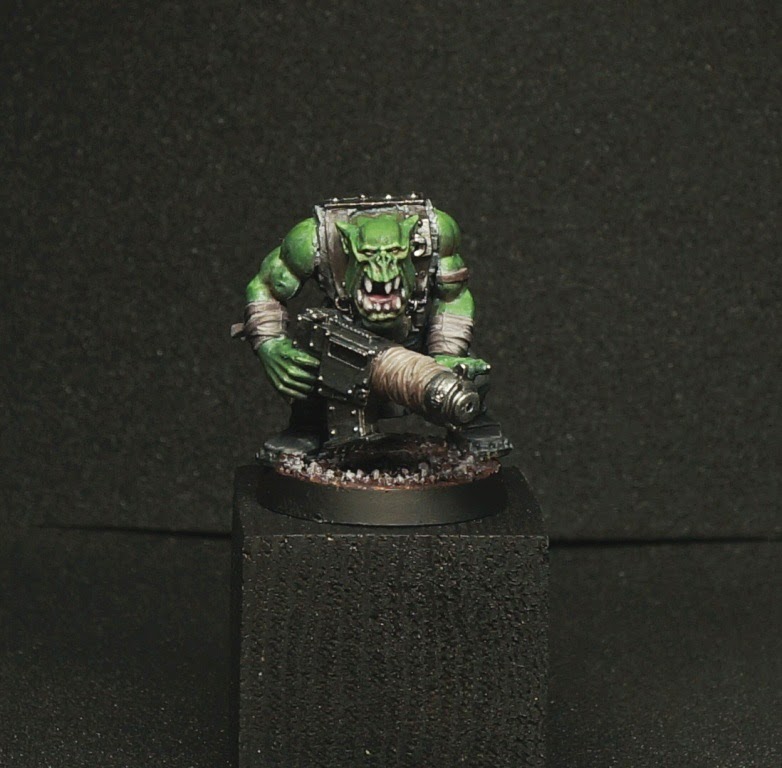 So Wednesday night I was hitting a wall in inspiration to finish painting up the Thing Bust or work on my base. Maybe it was more laziness than inspiration maybe.. but whatever it was it was hard to pick up a brush.

With that feeling, I decided instead to clean up the studio a bit, and see what I have in the boxes on my shelves. Moving things around, and fiddling with the toys I had, I ran across my collection of Orks for 40k. This is a really old collection that I started back in grade school. And where I amassed quite the horde of infantry cheap as Orks fell out of style and everyone wanted those Blue Armored guys.. whatever they are called..

While looking at my Orks though, I remembered an email I received from GW a while earlier about an event. An event ( Called IronBreaker ) where you paint for up to 15 hrs on the first day, and then play 4 games with the models on the second. Mmmm I like speed painting.. I like Orks.. I like speed painting Orks!!! 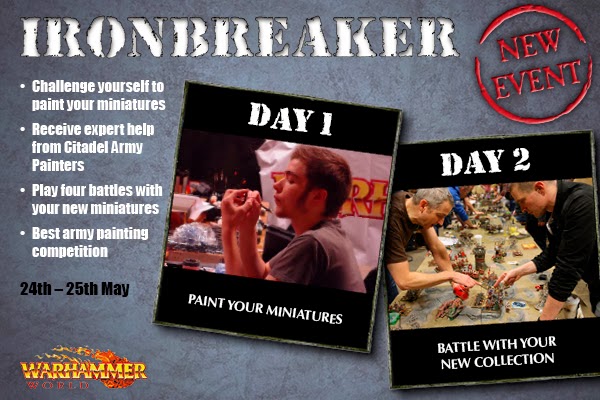 Mmmm... a spot of inspiration.. a spot of insanity... and suddenly I am sitting down ready to paint up an Ork Shoota boy and after writing a quick list of potential models to take with me.

Thought process here was to see if I can make a quick and easy color scheme to replicate across about 24 Ork Shoota boys, and would go nicely with some vehicles and bikers.

First thoughts ( after reading the rules again ) was that it had to be easy to work off of a single primer color ( or push the envelope and try for a 2k one :).. I am anything if not a man who likes to be the exception to the rule! ). So that was the jumping off point, and so I primed up the Shootaboy in 2k style. 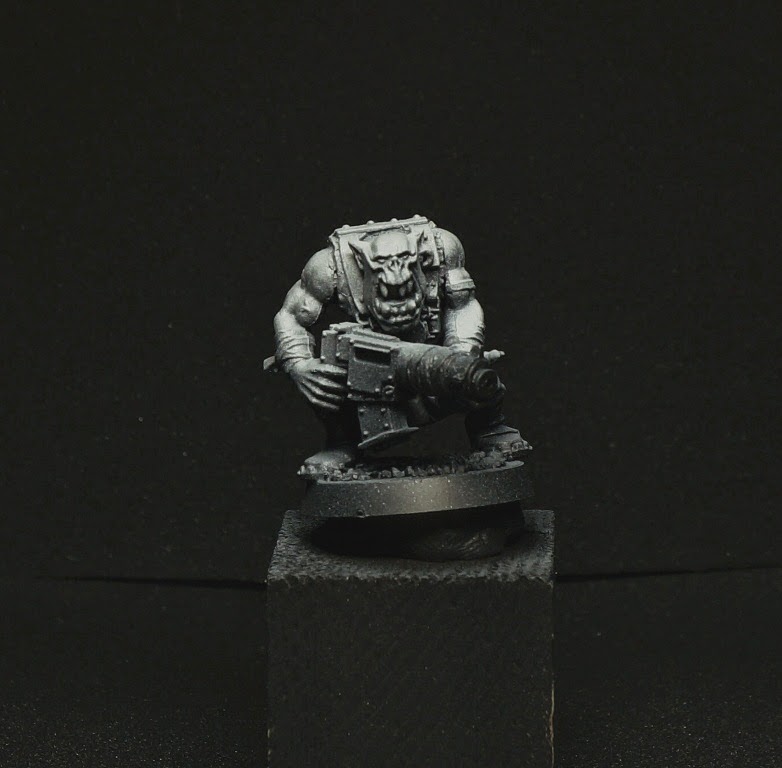 Ok.. right.. so now what? Obviously the next step is to figure out the main colors or tribe for the Orks. Since we are trying for speed here.. I thought "Mmmm.. goffs should be easy.. Black/White scheme.. can stay dark.. no problems!" Woe is me on this.. but I digress..

From here on out, I will show the step by steps of what I did, but I also want to point out that I really changed how I paint something.. As normally I would have hit all the main parts of the model with some color, and then looked at going back over it again for details or shadows or lights, etc.. but Noooooo thanks to people like Stephan Rath, Roman Lappat, Raffa Picca, Ben Comets, Matt Cexwish, Arne Wilkens.. etc. etc.. etc.... somehow I began to break the model into parts, and really focus on making a nice looking model.. instead of a gaming piece.. Though this does not hit me until I am further into the painting..

Again.. the goal here was to find an easy color scheme and way of painting the boys so that I could do 24 of them ( plus crew and bikers ) in short time, while still having time for things like vehicles ( 5 bikes, 2 trukks, and a dakkajet? me crazy! ).

And we begin with the skin... 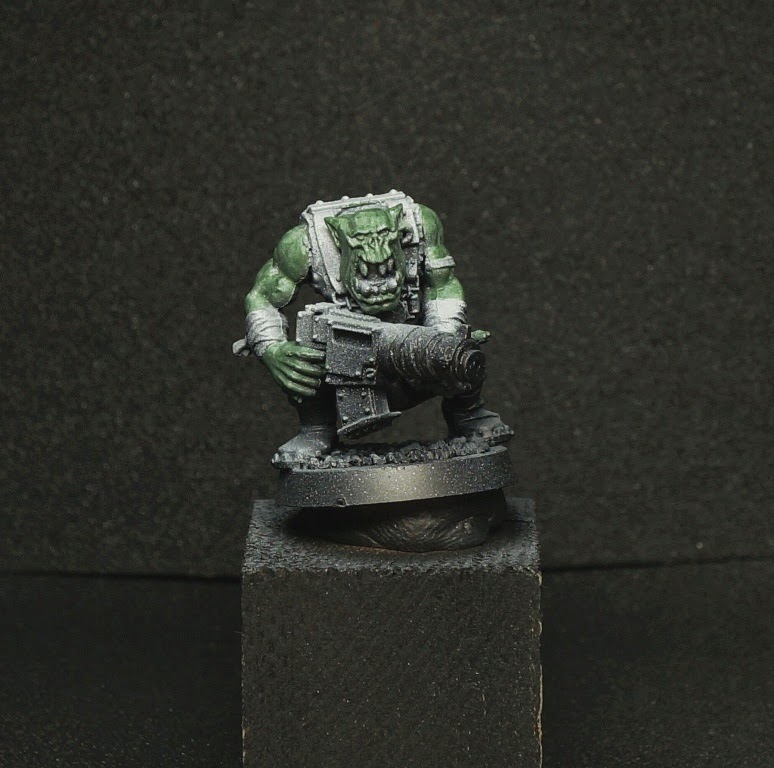 Simple enough.. a generous covering of green.. slightly darker, but there.. Letting a bit of the 2k primer show through to give me some help on shadows/lights.. the plan is currently OK! 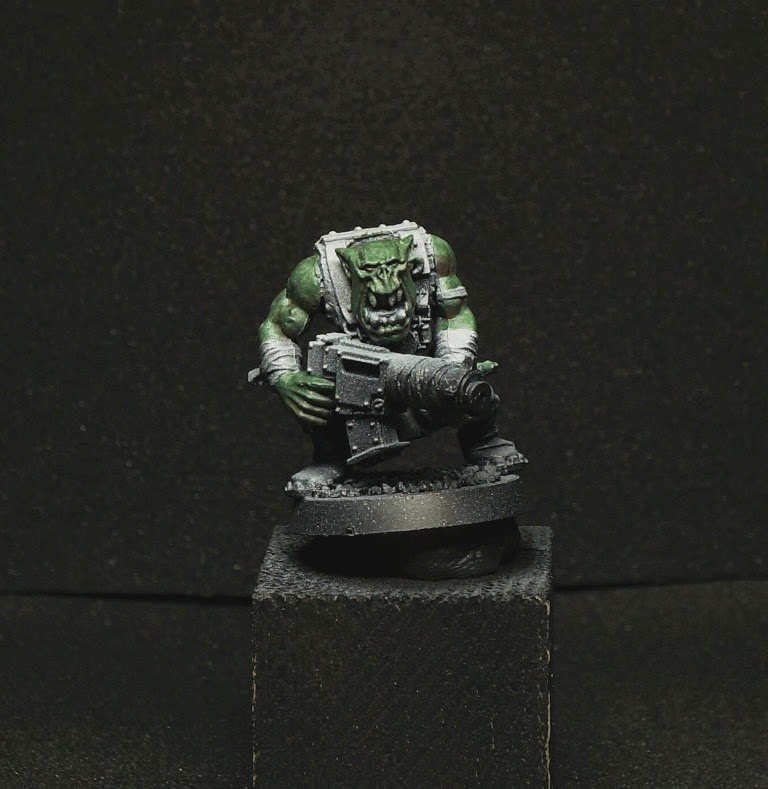 Ok.. let's add in some shadows then.. so take out some red/brown color and mix it with the original green and slop it into the shadows.. mmm... looking OK.. giving it some contrast and using the style here I can see the complimentary colors playing nicely together on this guy so far. Woot using something I learned from all those classes into my work while not fully realizing it.. yay! Still pretty quick work at the moment here.. 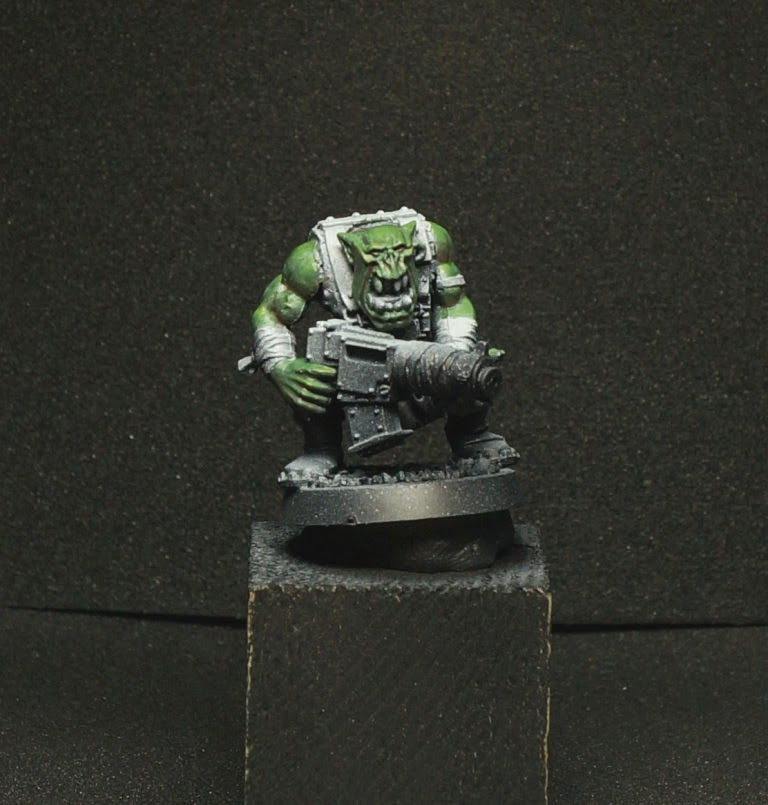 Alright.. now some lights.. and for this let's try a lighter green.. Nope.. not working.. so let's throw in some yellow.. Ah.. OK.. I can begin to see some light on the model! Yay! But now I feel like I need to fix the mid tone, original colors.. mmm Starting to slide a bit in regards to time here.. already spent 30 minutes.. but justified in my mind cause I am taking photos and still trying to think of the colors to use overall. Carry on! 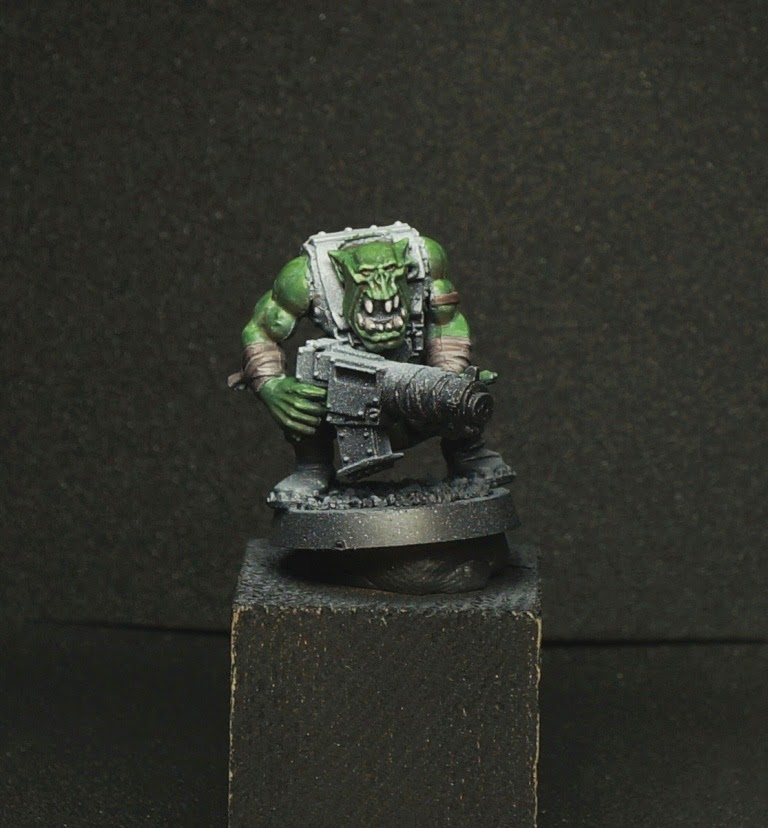 So skin is fine at this point.. lets move onto the bandages on the arms. Here again, instead of just slapping on a base coat, I instantly move into a wet on wet style of playing around on it. Starting with a brown, and adding some cream color and then some black at one point I think? I know while painting these that I am spending too much time, but I am liking the results that I am seeing at the moment. Continue on... 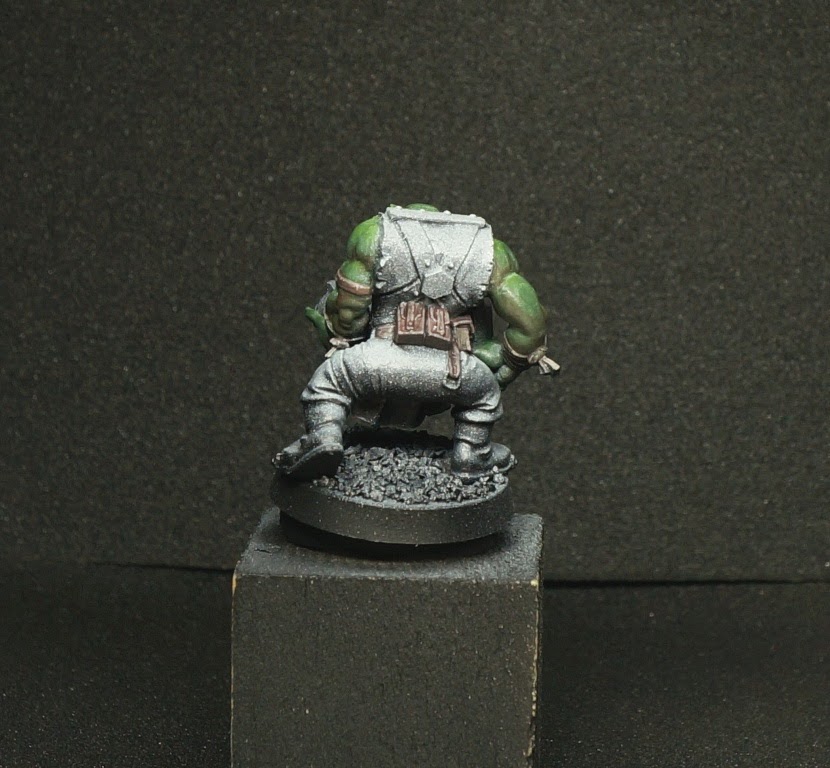 Continued on with the belt and pouches from the back of the model. Not fully happy with it, but probably the smallest or quickest amount of time I spent on a piece here. Ok.. Continuing... 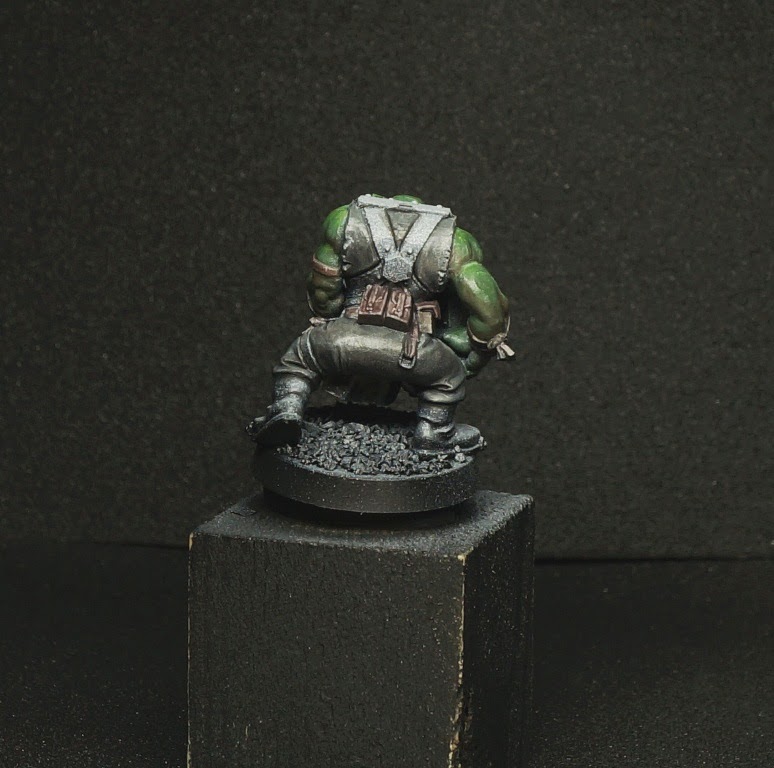 Pants and shirt get some color.. or not? Since I was thinking Goff while making it.. I tried for a darker grey coloring here. Basically.. just using a base level grey.. slapped it on.. and then began to mix it with black and white. Some parts came out great, some not so much.. am not sitting at well over an hour on this model and beginning to think that I am over-complicating things here.. 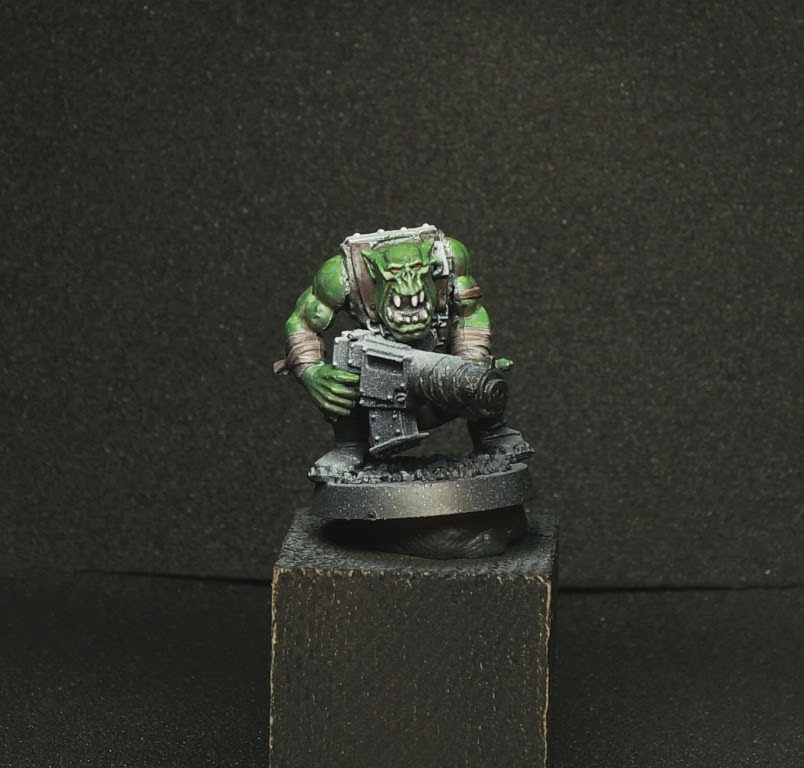 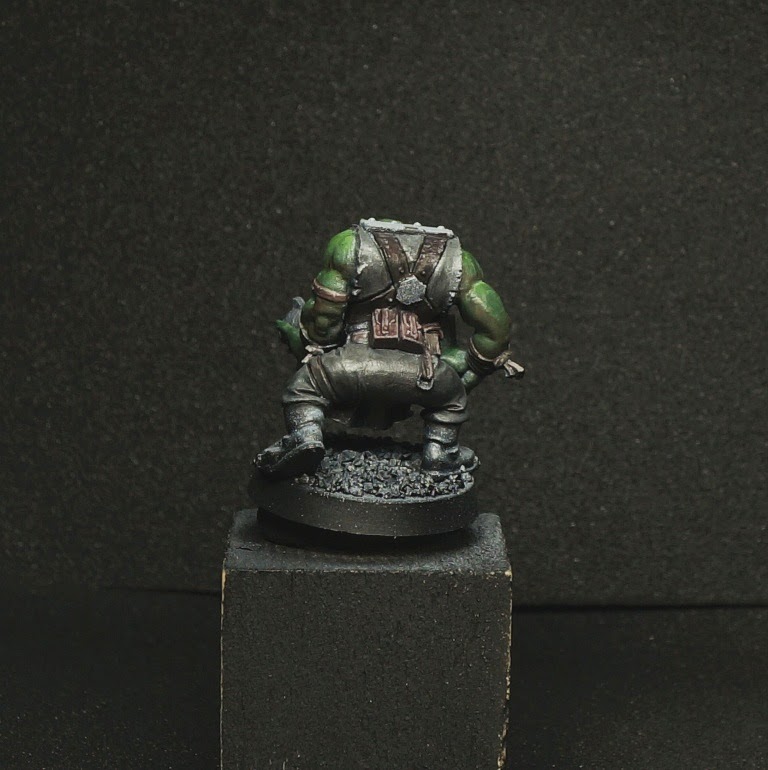 Some work on the straps. I am beginning to think I am going insane on such a small model.. and wondering why I am doing all this work here for what is supposed to be a quick model.

Anyways.. again, the same brown as before, but this time no cream, just black and white. Also amazingly no washes have been used yet! I think this is part of my problems on speed... 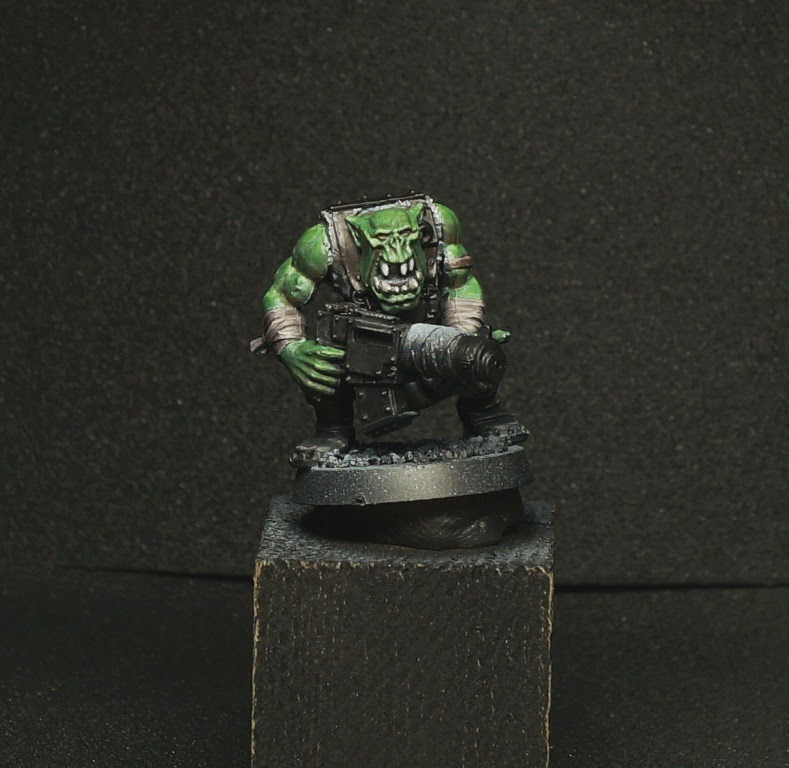 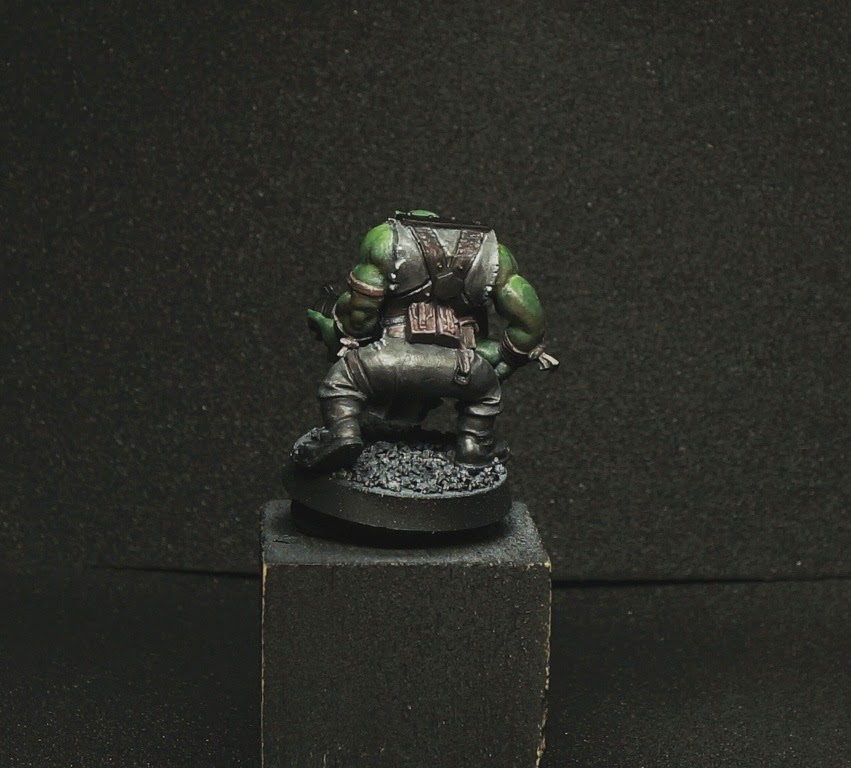 Just some black for where the metals will go.... 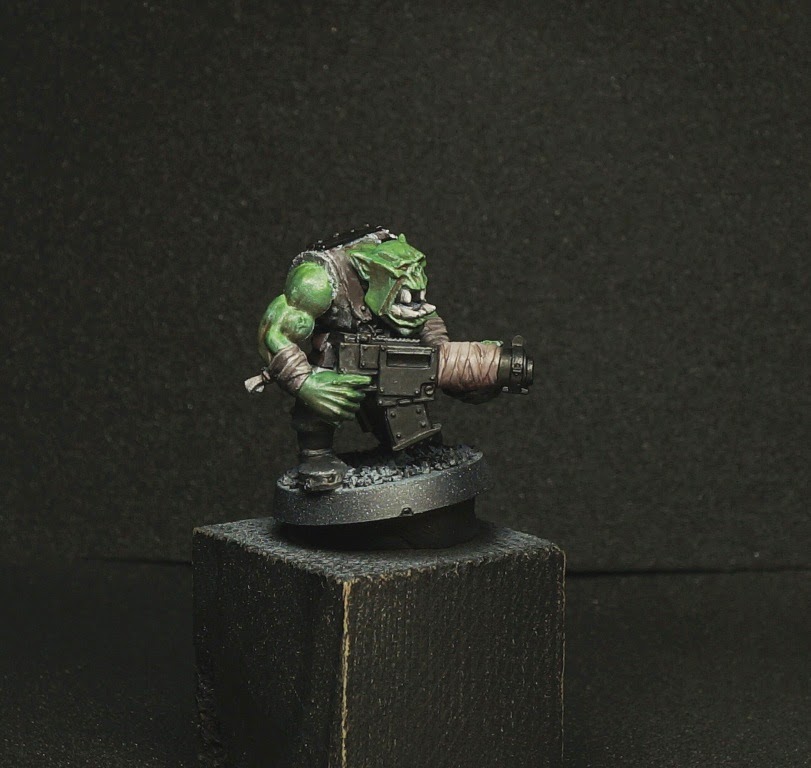 And then it was about this point that I crossed into a 2+ hr portion of the model, realized that this was not a quick paint job after all, and decided to do some more details.. It was also where I basically just started to finish the model up and play around with things on it. 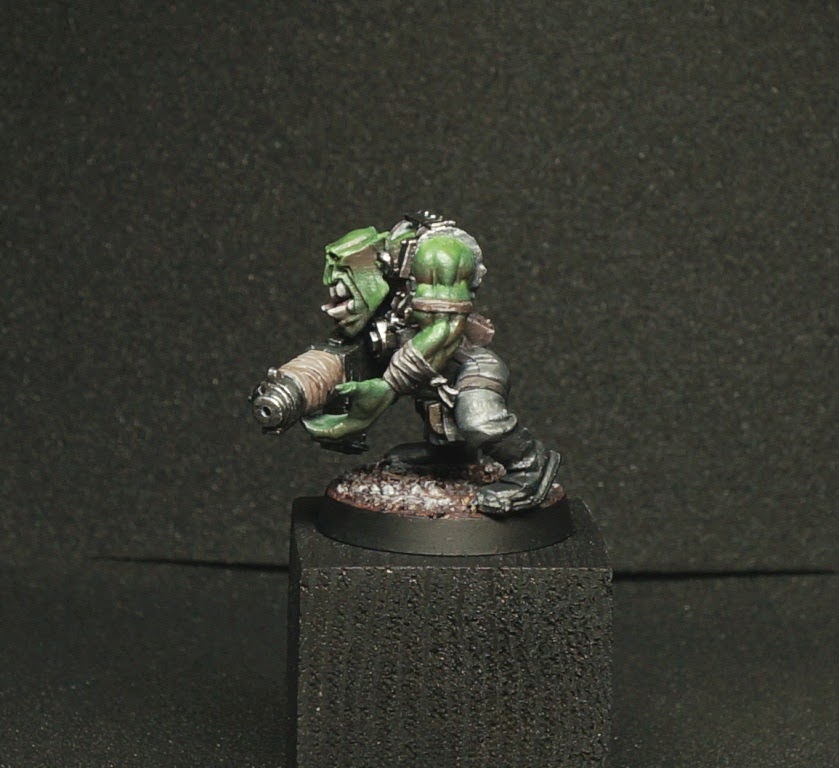 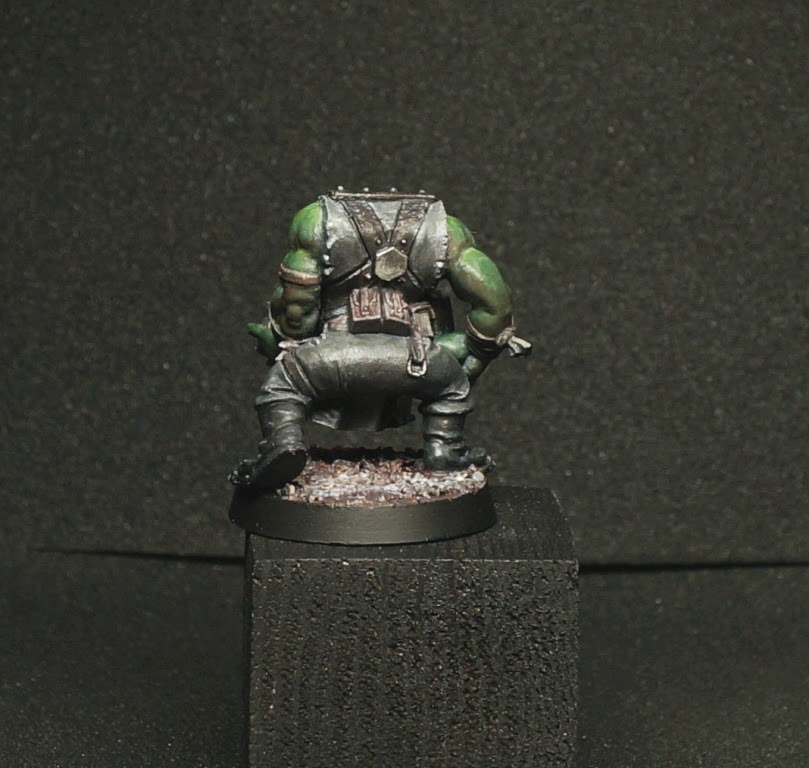 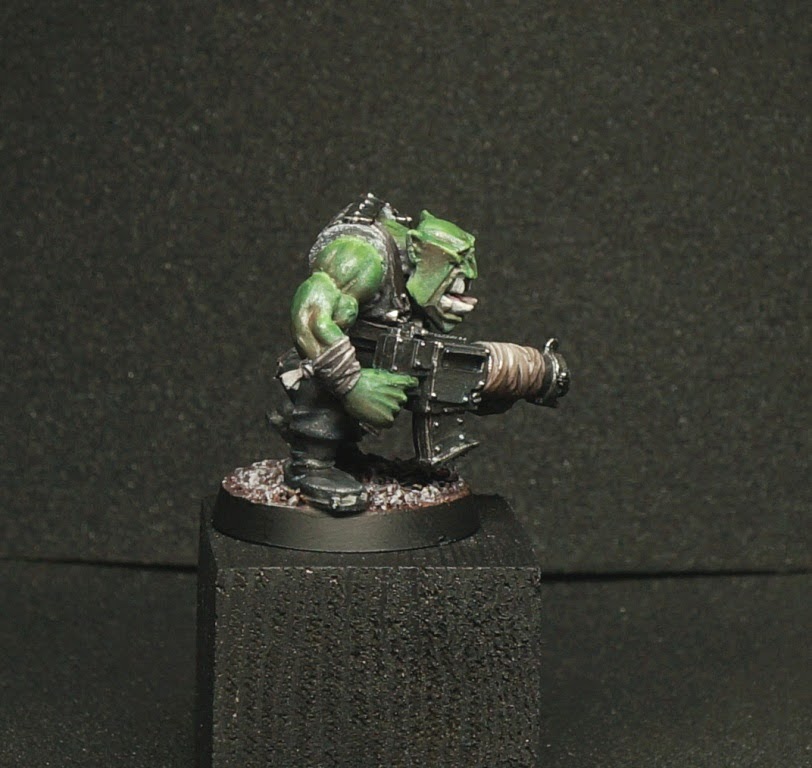 Metal is finished with a mix of dark and light colors.. some blue washes and black ones tossed in for fun. The skin gets a bit of a wash with green and reds. And the bandages get some black washes also.

Base was already started with the rocks, which I for some reason painted.. then said.. nope.. no good. So I threw on some GW texture paint, and some of that crackle paint from GW also. Neither did well, but I painted it up with some red/brown again, and moving it up to grey/white for the rock sections.

Overall I think the model came out far too dark for me.. again.. need to work on the light portions more. It took faaaaaaaaaaaaar too long to paint up so this scheme will not work for me. But I did learn a few things that I will incorporate to other models moving forward.. maybe even the big bust that is sitting around at the moment!

So that's it.. my thoughts and process on this step by step Failed Ork Experiment... but on the bright side.. I have another painted Ork! Just another 400+ to go at this level to have a nice army of them :)

Will try this again in the future when inspiration shuts me down, and see if I can achieve an easy, and identifiable scheme for armies... let's see if that one becomes successful shall we? Enjoy the weekend!
Email Post
Labels: Ork Table Top + Test