So as an early Christmas gift to my son, we picked up Star Wars X-wing on Amazon when it was on sale. Mostly cause he is starting to understand what Star Wars is from kids at school, and was interested in it when at the Reading Warfare show recently.

And what father doesn't want to show off Star Wars to their kids!

But in order to play it we need a table. And the starter box works with a 2x2 foot board which just so happens to be what I have in MDF up in the gaming room ( for a long defunked terrain building project from the past ). So with that we decided to do a bit of Father/Son bonding over the weekend and paint up a gaming board for this game! 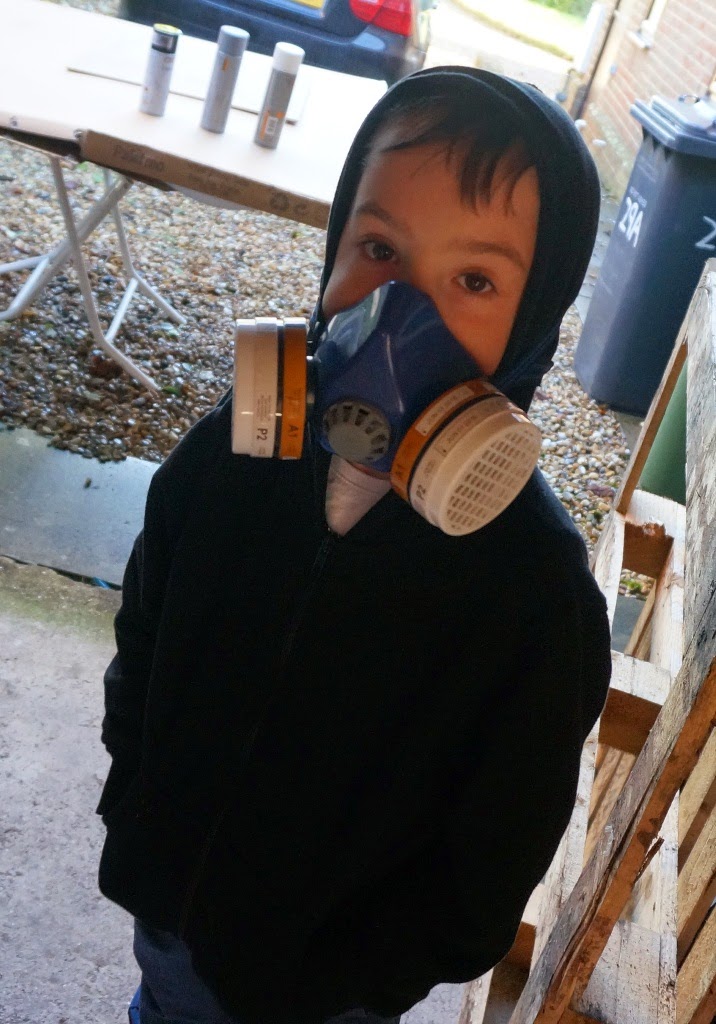 First things first.. need to get on some warm clothes.. and put on a respirator. So that we don't suck in any of those bad spray can gases that we will be using for this piece. 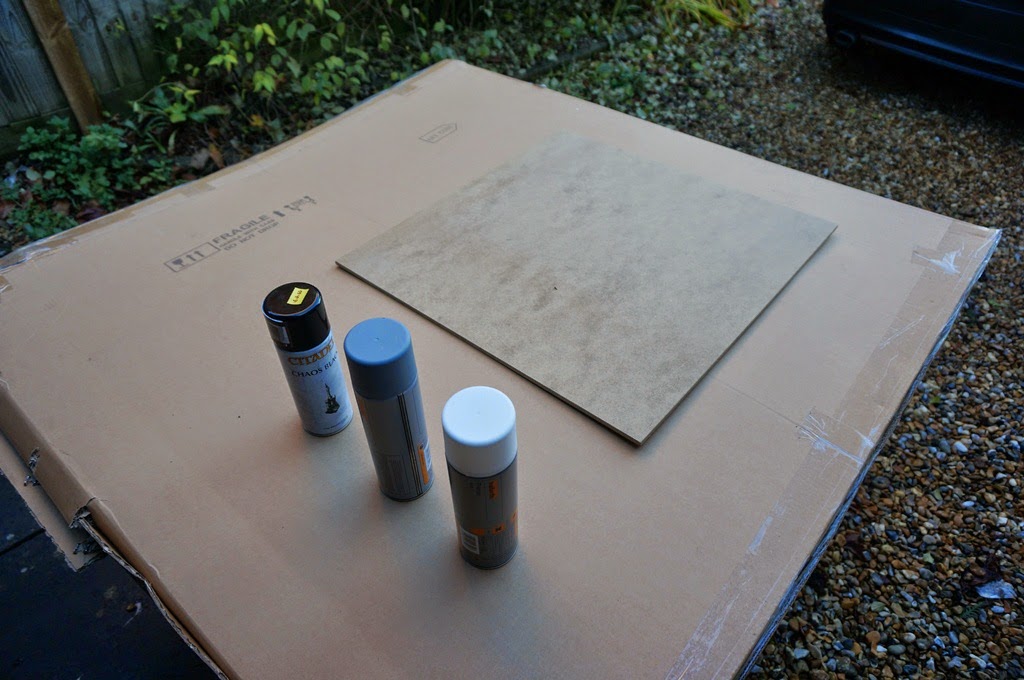 And the set up here.. a 2x2 foot board, black/grey/white spray cans, and thetable with some cardboard on it to save it at least a bit from being hit with the colors. 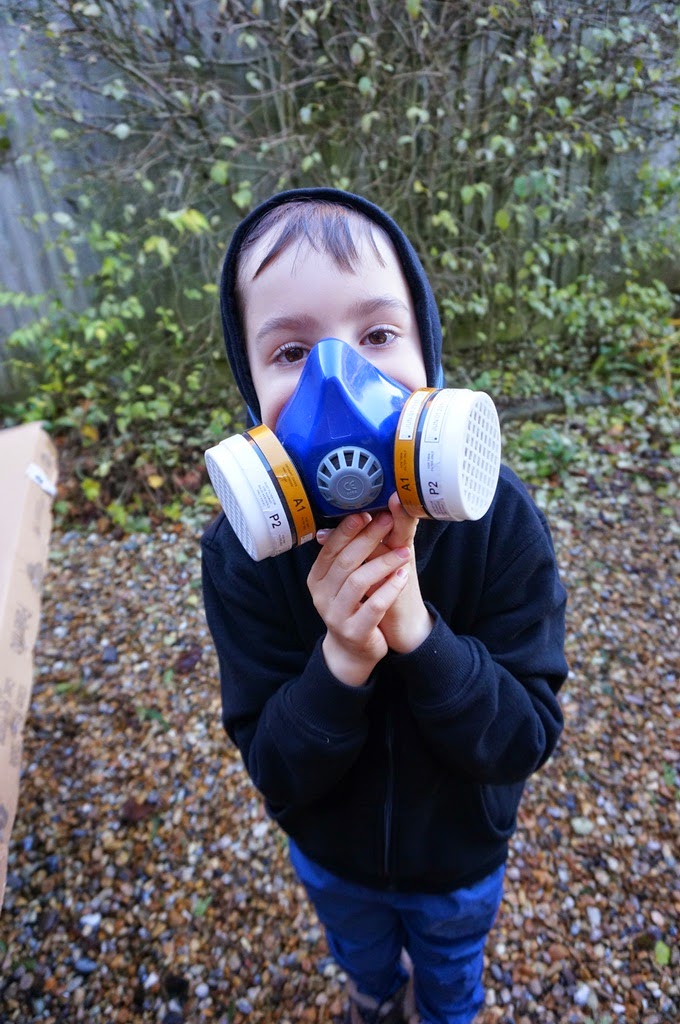 Help me Mr Lee.. your my only hope! 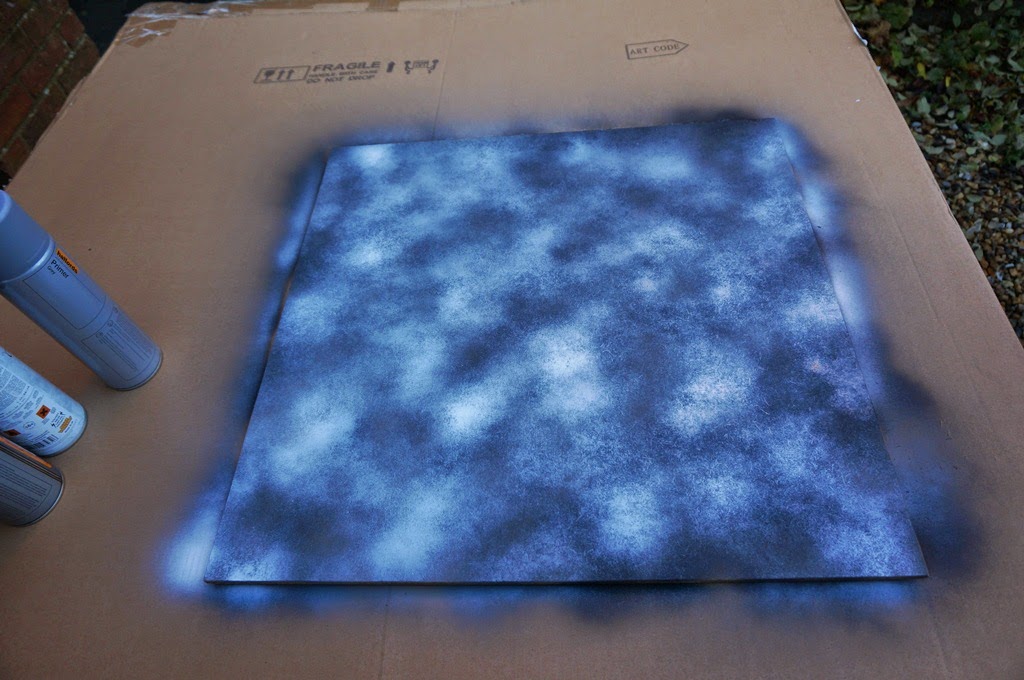 Laying down the start of it.. random shapes and styles with the 3 colors.. to make some areas brighter than others. I really should have just stopped here.. but I misted it with black and darkened it up too much at this point. 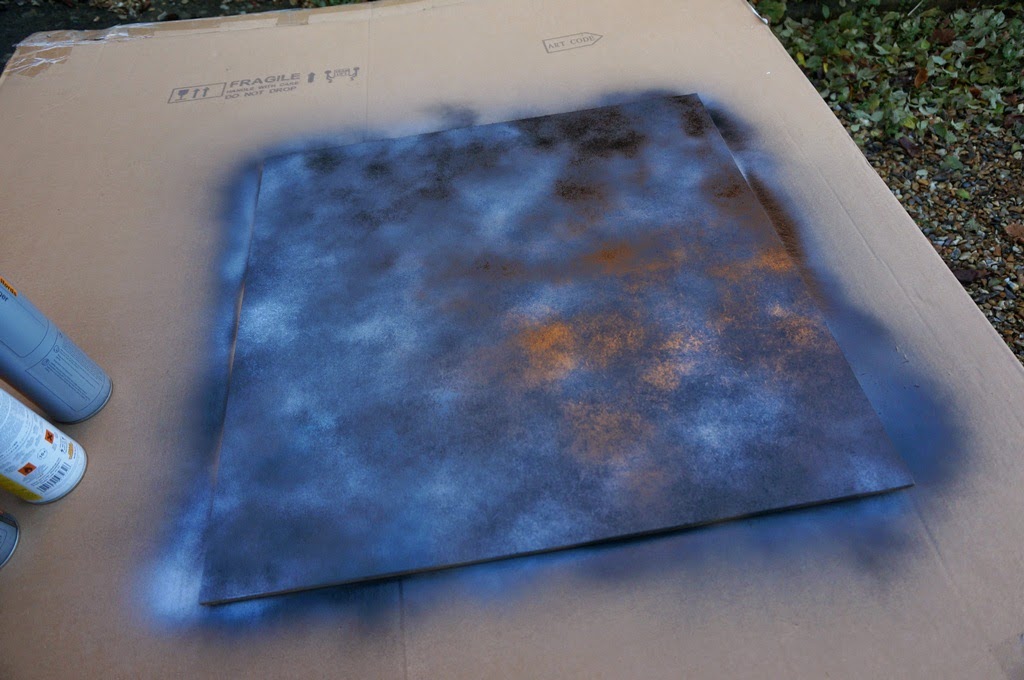 The shine of brown here is from the light reflecting off the wet black paint. But I still liked the direction that it was.. but I think in the later steps the whiter sections would have been a lot more helpful.

Now I read on line of how to make easy stars with aluminum foil and holes punched in them. 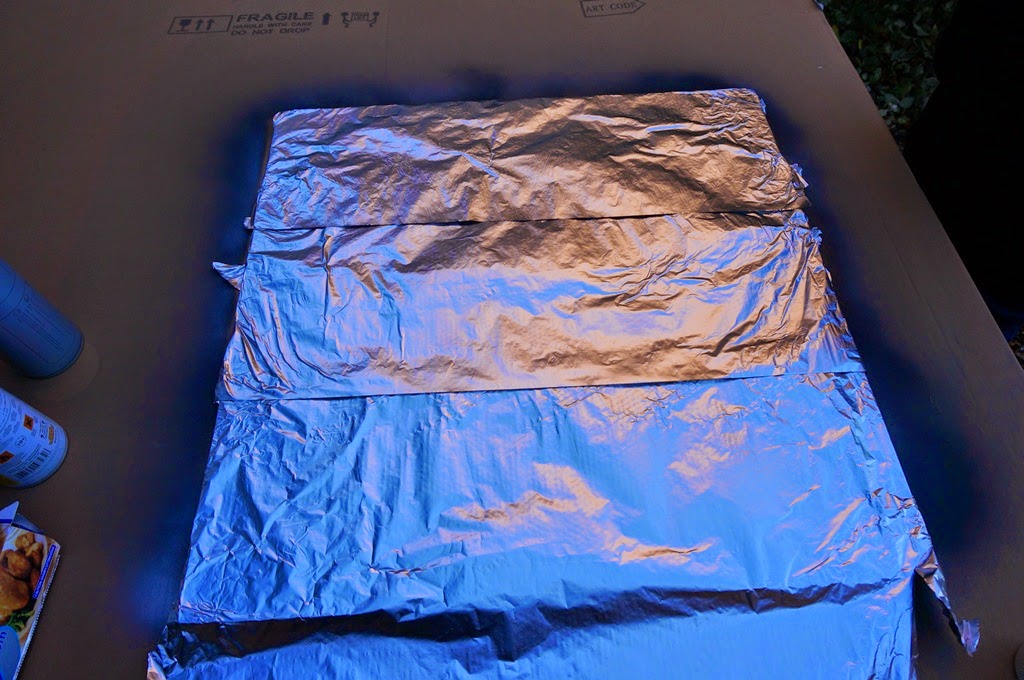 But poked is the key word here.. whereas me and the little Jawa sidekick here did more scratches and tears.. 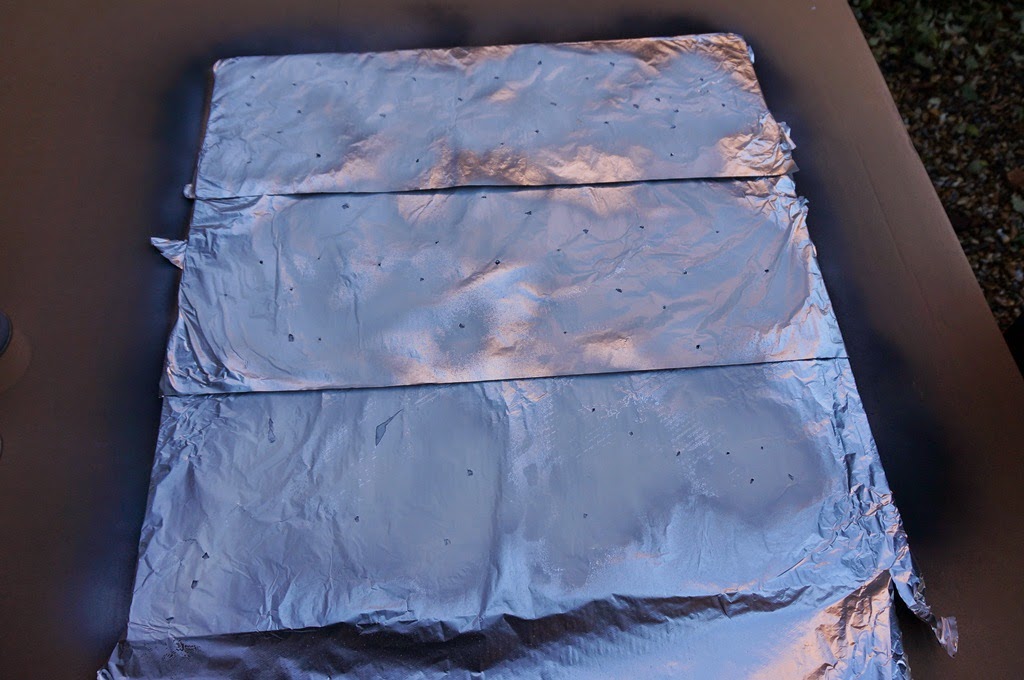 But we continued on.. and I sprayed it white.. 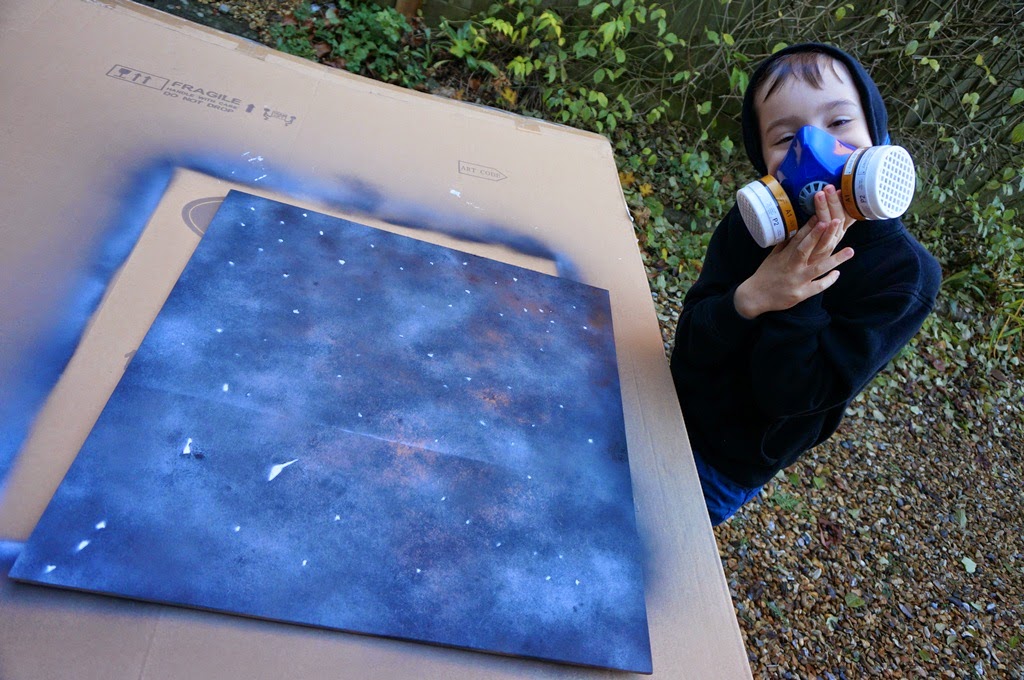 At least you can see them here! But they are a bit much, and not exactly what we want to see here either... argh.. let's see if we can fix it a bit with the airbrush though! 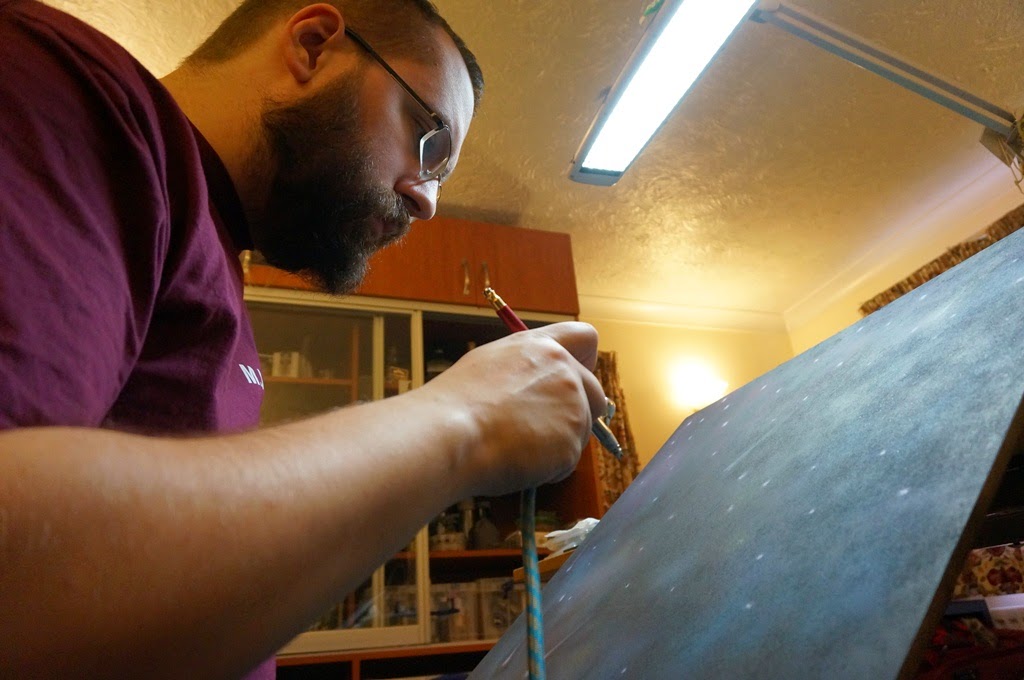 Inside we tackle it with the airbrush and see what can we do with it. Adding some blue/red/purple/yellow etc... and more white and black in areas. All in inks from some artistis inks I picked up from the Hobbycraft store locally here. Cheaper and more powerful than say Army Painter washes, and cheaper especially than the Scale75 colors ( which are awesome but could run out of them on one board! ). 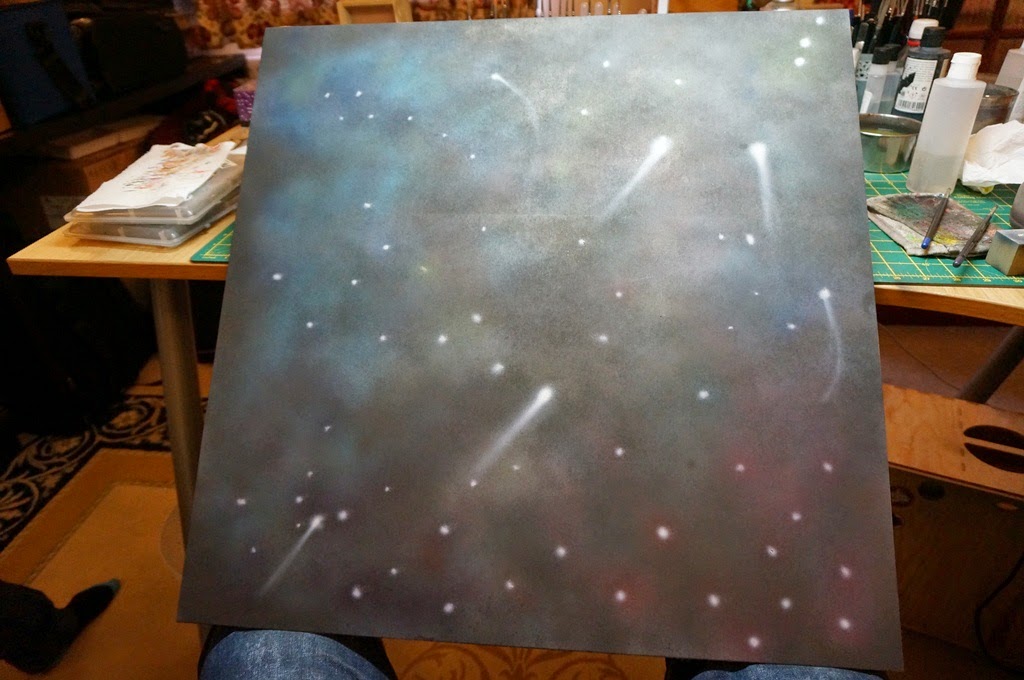 I like the overall direction at the end here.. but I believe that I need to bring in some more layers of colors to make them really pop out, and add more black. Much more black to make the others really come out.

But for a gaming board with my son at home.. and having the ability to hang out with him for an hour or so to build it up.. I think this was a nice little side project! 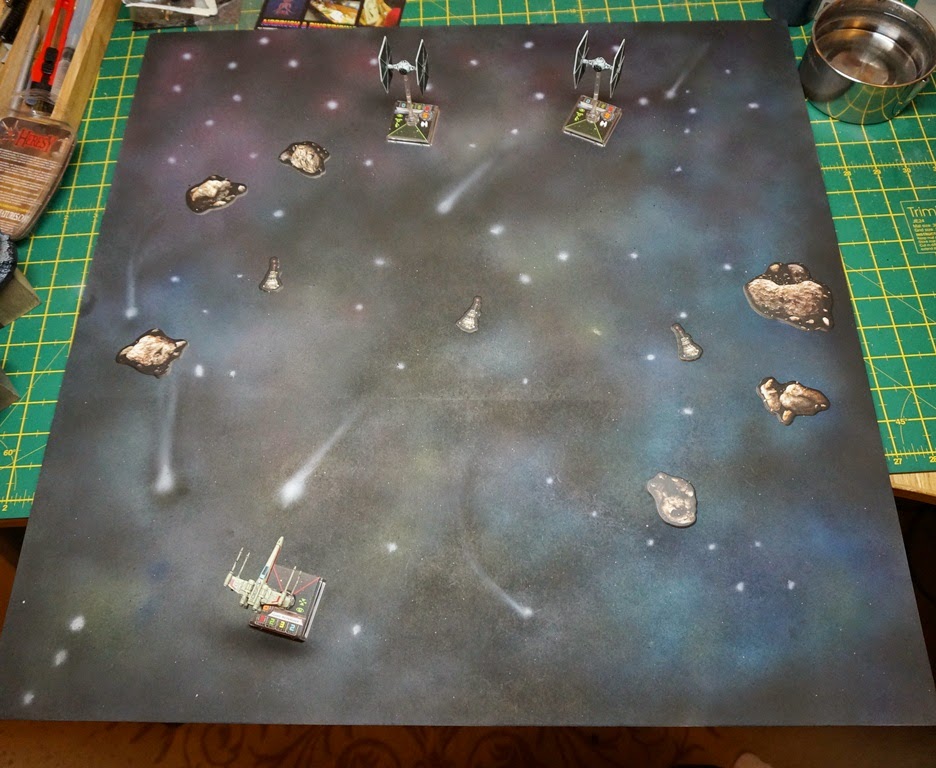 And now we just need to see how Luke will fair on it against the Evil Empire forces.. hopefully some games will be played over the holiday season!