Go figure the second part of the painting class would involve actually painting something! Wow.. what a concept... who would have expected that! 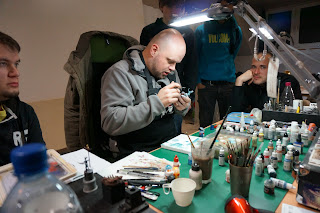 Again we were hit with a ton of theory. Talking about contrast, saturation, color theory, complimentary vs contradictory, blah blah...

He also had quite a few slides concerning some inspiration pieces to get the ideas flowing. Always commenting to look at your surroundings and take them for additional ideas! Don't force it..

So starting with the basics, we all walked away from Kong's desk, and went back to our own. Looking at our bases, and thinking do we go for complimentary or extreme contrast!

For me.. I went the path of most frustration.. extreme contrast! Why frustration.. well I worked with a color that has caused me pain in the past.. VMC Turquoise! A good contrasting color to the brown/orange base that I had already. If this wouldn't pop and go BAM off the base, well then not much else would I think.

Beginning part was to lay down a good base coat. 2 to 3 layers of our main color, which was recommended to be a bit less saturated overall. So adding a bit of grey to the mix to bring the intensity down, and make it easier to deal with. In the end our paint palettes looked something like this ( but with different colors ).. 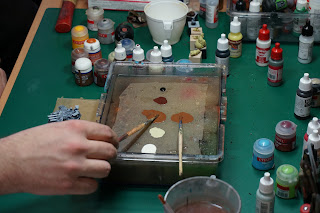 This was Roman's palette more for the basing, but the same principles applied. Taking the base color in the middle, and then setting up your darker and lighter tones on each side of it.

What this accomplished was being able to always go back to your base color to make corrections or at the very least have consistency within your colors.

Sounds simple, most will go "Duh, Mr. Lee.. that just makes sense.. " but unless you are familiar with doing display or more complicated color schemes.. this was quite useful information! Plus it shows a different style of using a wet palette ( as many seem to be posting up photos of theirs as of late as if theirs are the new black or something ).

So base coat done, we start to work the shadows. Easy enough.. this is something that I do well, not great, but well enough already. But the highlights.. ARGHH!!! How they be the bane of my existence still!

Roman was good enough, and patient enough, to keep helping me here and directing me to where and how I can do highlights. Though looking at it even now, I know I can push them further ( and should! ). 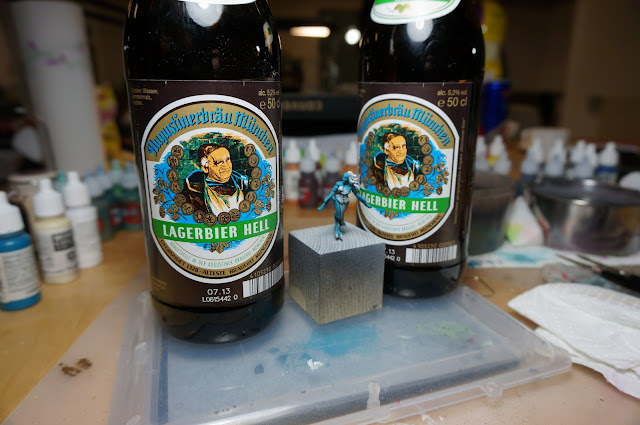 Base colors and shadows/highlights happening. Oh and yes.. one of the few times we drank.. and drank in HELL!!! Right where one should drink while working on Daemonettes apparently! ( Good beer though! ) 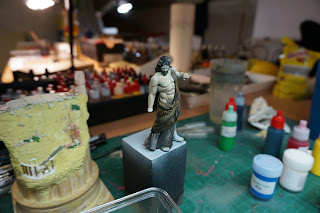 This photo on the left was of one of the participants who joined the workshop a few times before. His project was a bit more intense then the rest of ours, but it shows the level of extremes and contrast that Roman was pushing so hard for all of us to understand.

Hope to see more of it in the future over at 5th-Dimension from Malekith!

Eyes, color transition for claws, metals, and leather. Have to say, the part that I found the more interesting here was the leather bit. How to make it feel a bit more weathered, and aged. How doing layers of different washes, and shades of highlights, etc.. could give certain effects. Still on the learning curve there, but I have a few models that it can be tested on soon enough!

In the end, this is what my model looked liked, and also what the others from the class were able to put together as well! 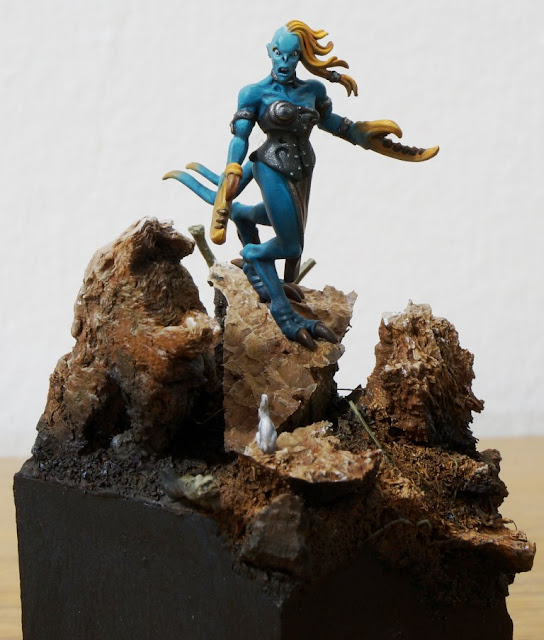 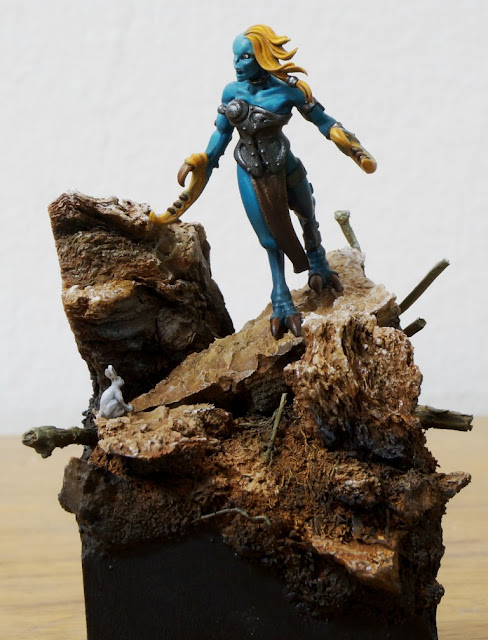 As I said, I tried for a stark contrast between the base and the model. Oh and a bunny for challenging my deamonette! Still not 100% finished though.. ugh.. 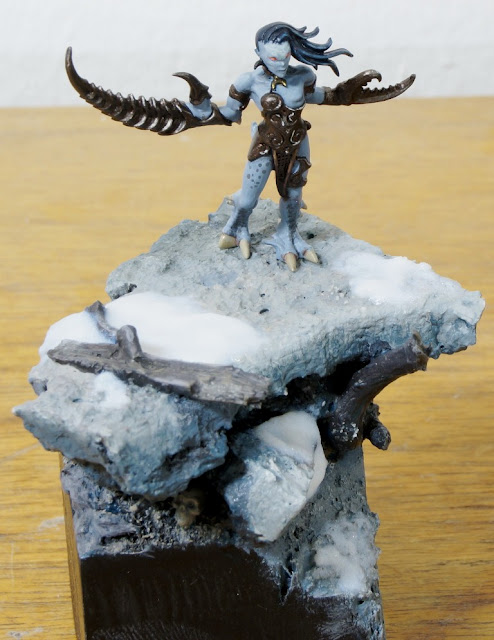 A good example of using complimentary colors between both the base and the model itself! 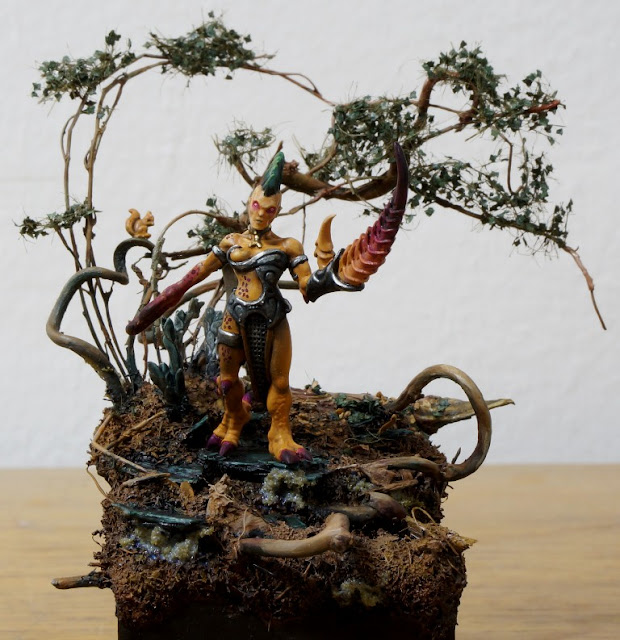 Great use of contrast once more, but I absolutely love the way the base came out! 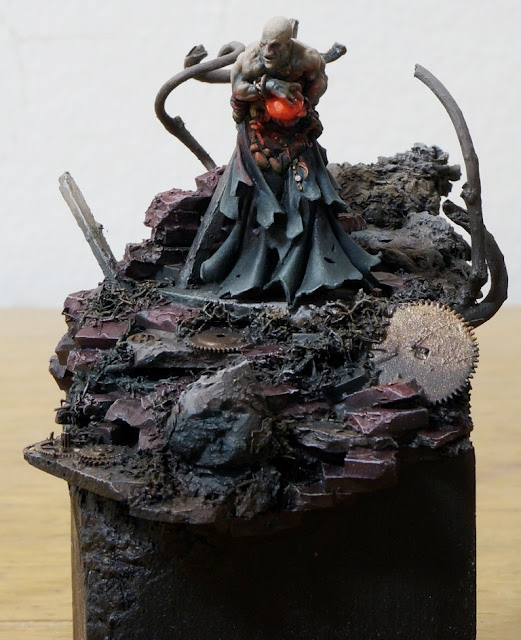 Another returning member to the classroom. Taking the lessons to adapt a Red Box miniature for this workshop. Also using some of Forged Monkies' red pigment to make the globe glow! 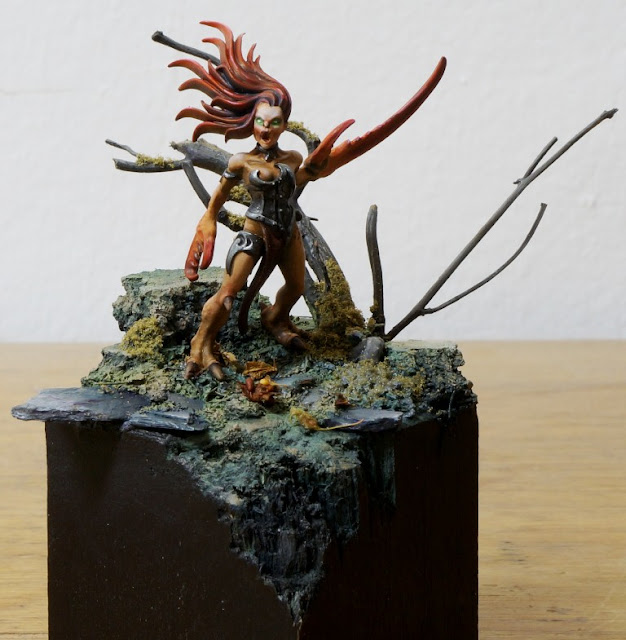 Not quite sure if this is complimentary or contrast, but the flow of the model and the base are top shelf all the same! The use of moss on the trees are a great little touch especially. 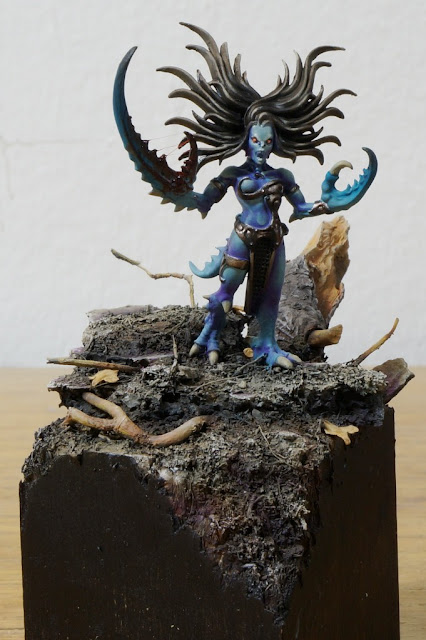 I won't lie.. when seeing this in the beginning, I was not sure the colors would work out, but damn was I wrong! The extreme lining used here really made the lady pop! And the highlights were perfect levels! My partner in crime's model and base. Great use of the colors.. only problem was that he ran out of time and didn't finish the freehand marble effect! DUH! 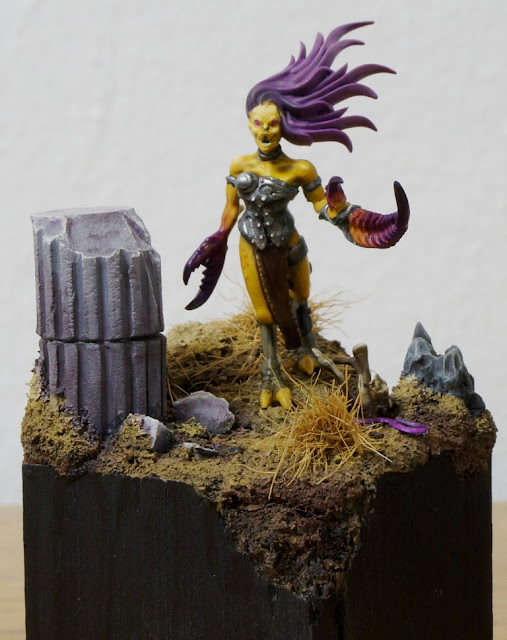 Fantastic work at blending a very difficult color here. Very brave to do yellow, but it cam out great in the end. 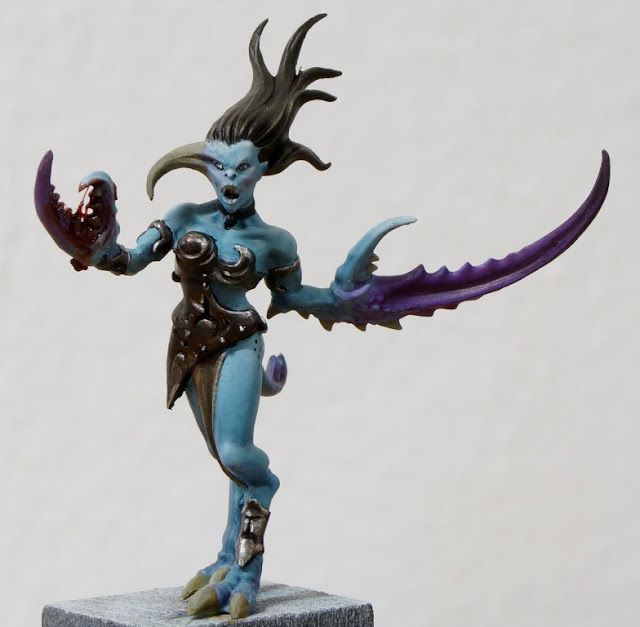 And the test model from Roman. He didn't get as far along as everyone else, but that was because he was too busy answering my questions! Oh and teaching the class probably too!

Next up is just a final wrap up review of the workshop. Final thoughts, comments, and what not concerning how I felt about it, and what other things occurred during that time. Cheers!
Email Post
Labels: Germany Painting Class Review Workshop