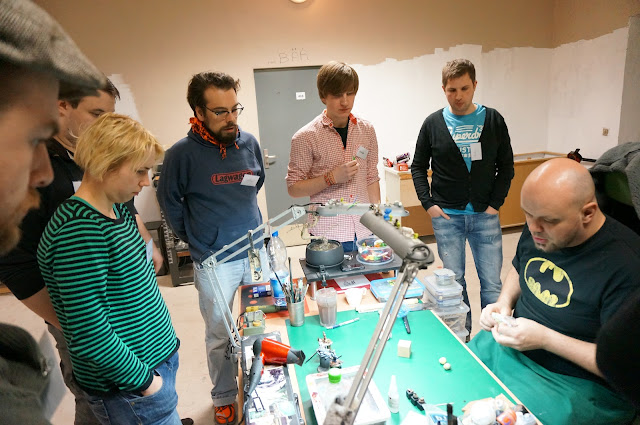 So the workshop is over.. I am back in Istanbul ( despite the weather trying to change that decision! ) and now I have had some time to reflect back on the time spent in Augsburg with Roman and the rest of the class. 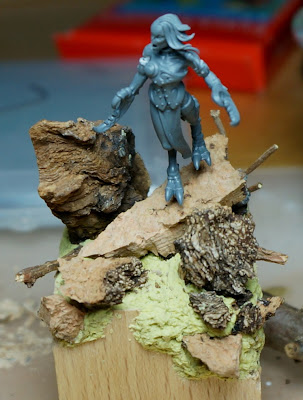 One of the first things that we worked on was the basing of a display model. Understanding what is needed, and how to tackle this aspect.

This was the main part of the first day, and a good portion of day 2 as well. With tons of theory being thrown out concerning the flow of the model and the base, and how to align them. How they can shape up and how it can look pleasing or not to the eye.

So with boxes and containers full of basing materials, some Milliput Yellow/Grey, and motivation from the presentations we all got to work on the bases!

Biggest thing that Roman kept pushing for was to just let it grow organically! Don't force it, just go with where the pieces take you..

Mine apparently took me out to the back woods.. thankfully I wasn't shot.. this time around!

Using a fairly large piece of tree bark, broken up, along with some twigs, I think I managed to make something that might resemble a forest or outdoor scene. 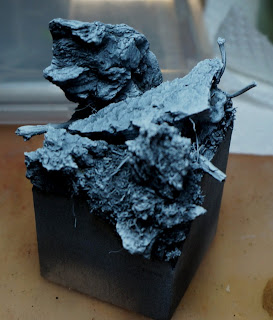 After letting the putty harden over night, we glued on some dirt, and did a 2k priming to begin painting. The technique used for painting would be used a few more times throughout the workshop, and that was the wet blending style.

We also took photos at this time so that we could reference back to them to understand where the light and shadows should be with this model.

Can't speak for others, but I took the photos.. and never looked back... bad Mr Lee! Not listening to the teacher! Even if it was mostly in German ( though as the workshop went on, Roman slipped into English more and more.. go figure! ).

The wet on wet style was veeeeerrrrrry interesting as it really did allow for some nice transitions between the colors there. Something that I am very eager to try out again! 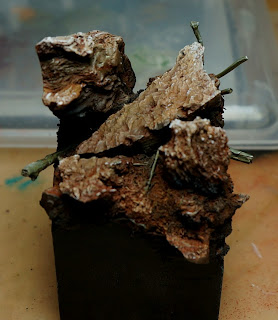 The color I started with as a base was Mournfang Brown from GW, and then used P3 Coal Black and VMC Black for shadows, but GW Screaming Skull and VMC white for the highlights.

I cannot stress enough how awesome this style was for speed painting up the base sketch ( as Roman called it ) of the base! Within 5 minutes we could see what direction the paint was taking and where we could go darker or lighter.

And yes, I say 5 minutes and that the paint stayed wet enough to use this style. Due to added a lot, and I mean a LOT of water to the mix. It was almost like just painting with colored milk on the base.. and when we were feeling confident that it was about finished, we "sealed" it with the mini hairdryer that sat on Roman's desk. *This either has to be dedicated to just miniatures or Raffa's.. can't see Roman needing it for anything else ;)*

One piece that I did do more on this was push the contrast. Again the theme of the weekend more or less here. Roman had pointed out that now that the main colors have been touched upon, we could tackle a bit more of the mundane or not so much fun bits. Taking a fine tipped brush, and hitting everywhere that light would reach on the base. And dotting it with a lighter color than what was there.

So the highest points got pure VMC white, others has a mix of base coat and white, etc.. even the shadows that were an off blue color got some highlights with the blue/white mix. To show that light can be found anywhere.

What's left now? Well actually the base is pretty much finished, though I still want to tackle adding a bit of foliage to it. So now that I am back at home, I can do just that! Add some grass to parts, a bit of fallen dried leaves here and there, and see what that makes it look like. Expect more shots of it next week, but in the meantime more articles concerning the other aspects of the workshop!
Email Post
Labels: Germany Painting Class Review Workshop