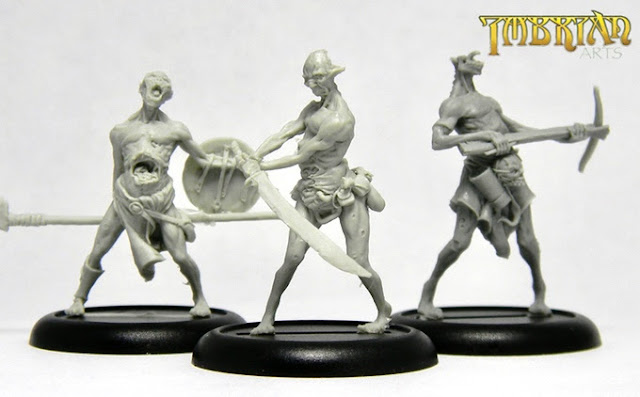 So I got the chance to paint up the Shamblers ( my wording ) from Imbrian Arts by Jody Siegal. A bit of pre-release for his kickstarter that has just completed (successfully I might add!). 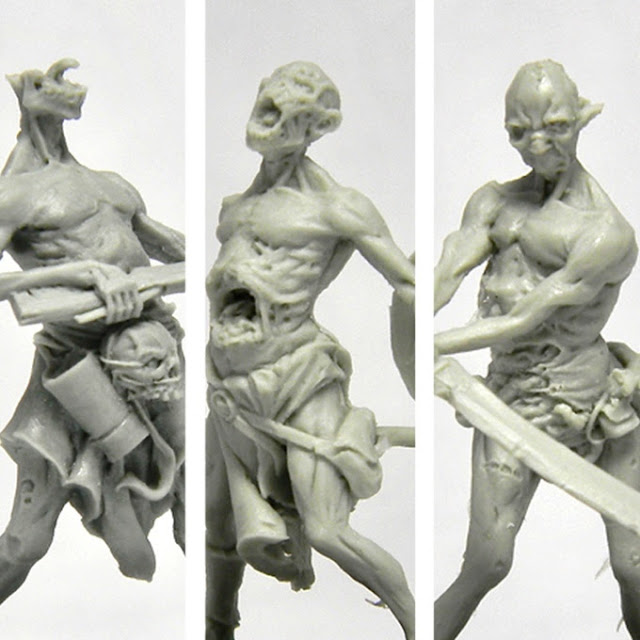 Although I have his range as it is now ( aside from the Bat Demon ) I decided to do a small diorama with his zombie trio here as they are so detailed and nice to play with. Plus they immediately screamed out for a group photo type setting..

So with that in mind, I got to work on building up a base for them in some sort of castle like setting. 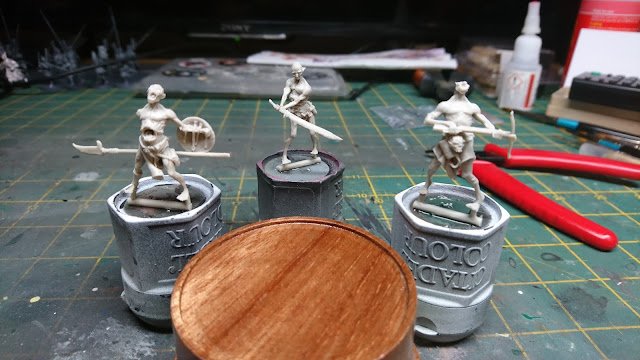 Of course this comes down to having the right socket to fit them all with. This one coming from Pete's Bases in UK. A nice round base to give an interesting shape to the models. 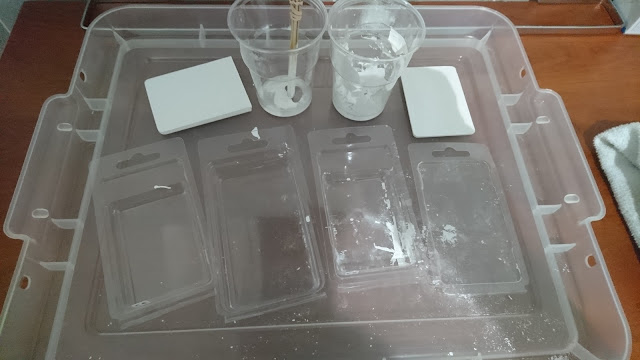 Thing for this project however was to make some brick walls. I was given a few ideas on how to achieve it, but I decided to go back to some casting of Plaster of Paris. Taking some blisters I got to work out some blocks of plaster to be used later on. 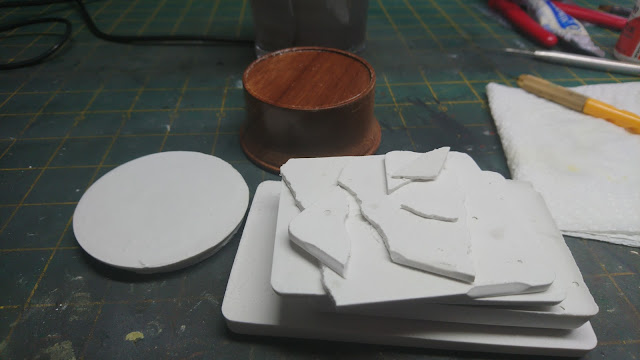 The hardest one to make was the round one. This was made by hot glue gunning a plastic cup cut to shape to the socket. Then the plaster was poured straight into the socket. Thankfully it didn't stick to either the wood nor the plastic of the cup. In the end I got a nice cast of a circle that I could use for the base of the .. well.. base... :D 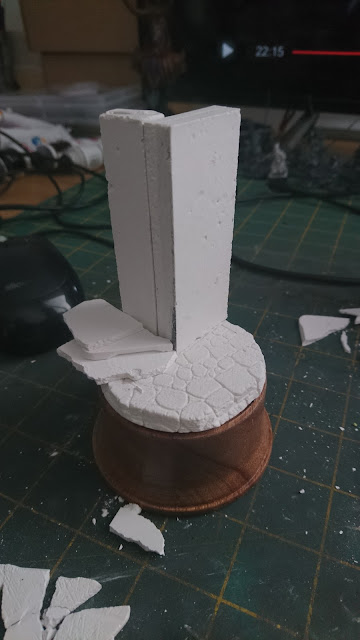 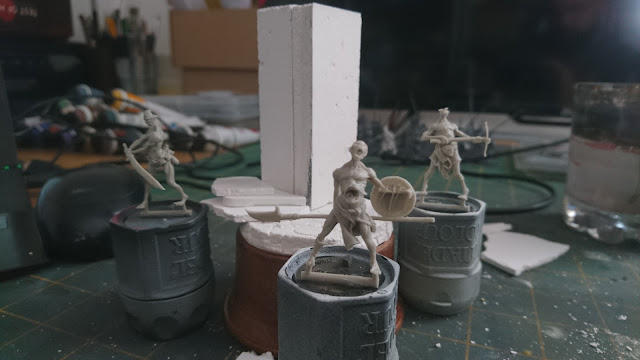 Some mock ups of the base with the models lining up to where I was hoping for them to be placed on the base when it was put together.

A central column was the beginning idea, and then having stairs to one side, and no idea as yet to the right hand side. But I knew that I wanted to have some levels within the piece to give it some variety overall. 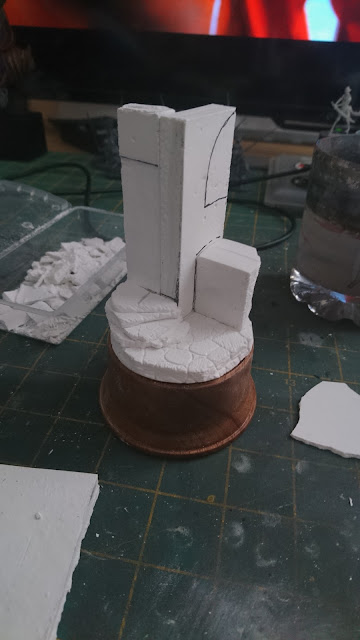 After some work I got the idea to do a platform on the right. And the stairs were to go up to a door. As you can see I started to carve straight into the plaster to create the stone texture. The walls are superglued to the base, but I did add pins for connection points. Both to the base and to each other just in case. 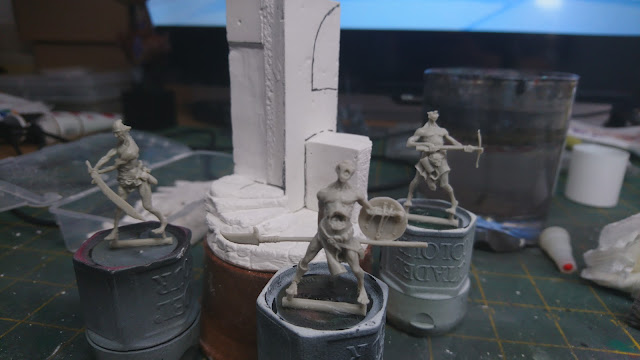 I would constantly put the models up against the base to check placement. And also for scale of the base vs the models. 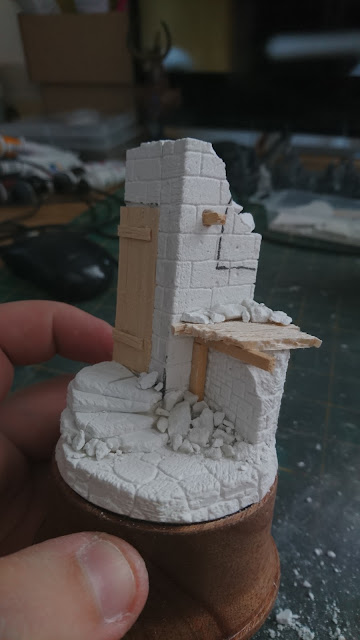 Stone work began on the central pillar which is now turned into some sort of wall. A wooden door tossed in, and some wooden flooring as well for the platform. Then of course a ton of rubble throughout the base. The wooden beam sticking out.. no idea but thought maybe at some point there was a larger frame for the platform? 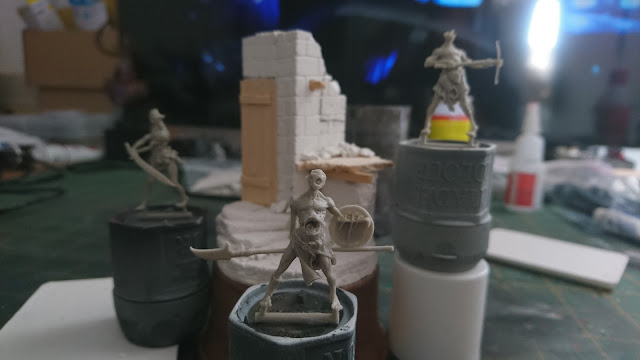 This time I began to put the models up a bit to show off their heights compared to the base as well. Helped me to understand if I had messed it up yet or not! :D Seems things were ok thus far though.. aside from the door. A good comment I received on Facebook about this was that the door looked too new in comparison to the rest of the base. So it was torn off, and replaced with a more shabby door! 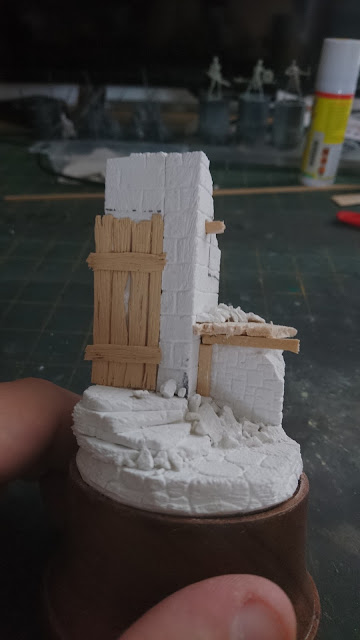 Which was fun to make as it allowed me to pull out my old but never used Balsa wood cutter... yes.. these exist.. and honestly it was really cool to use. I can see it getting more use in the future if I wanted to make something more symmetrical ( or just want clean cuts on the balsa wood ). 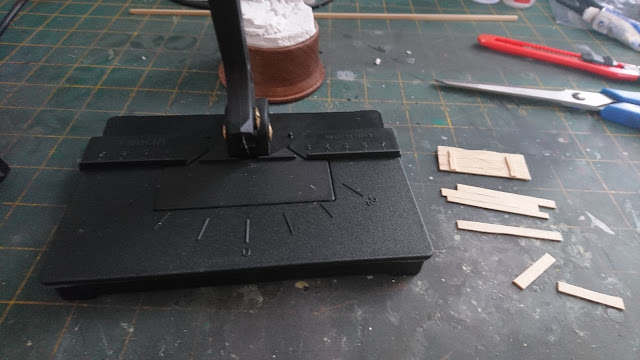 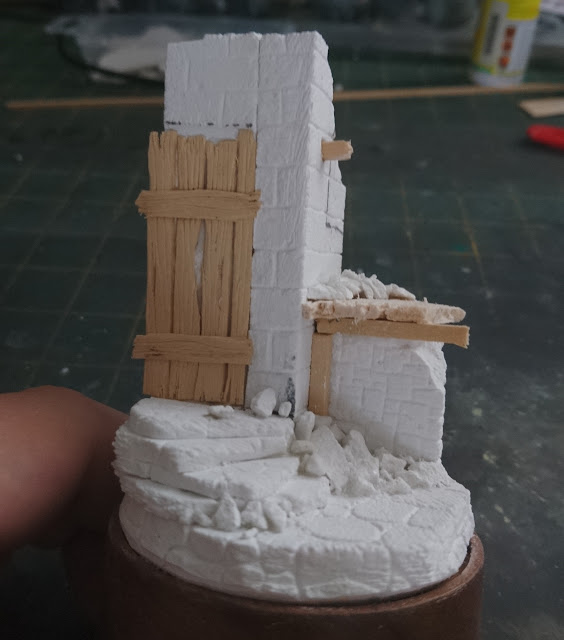 End result came out ok.. the back side has nothing on it, and I will keep it empty and painted black. Trying to focus it from the front if possible.

Next post will be about the painting, but hopefully you enjoyed this base building aspect however :D
Email Post
Labels: 28mm bases Display